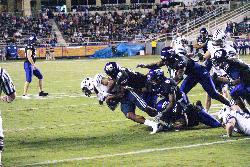 Saturday’s game between the No. 15 Horned Frogs and the Air Force Falcons will pit strength against strength.

The Falcons and their triple option rushing attack is currently No. 4 in the nation, averaging 279.9 yards per game. But the Frogs have made their name stopping the run, leading the nation in rushing defense allowing 39.5 yards on the ground per game.

“Their offense is a pretty run influenced offense and you know they are going to come out and try to establish the run,” junior defensive end Jerry Hughes
said. “So we are just going to try to slow them down for the most part of the game.”

But no matter how well the Frogs’ defense will contain the run, head football coach Gary Patterson said the Falcons don’t know the meaning of the word quit.

“One thing you know when you face Air Force is that they are going to come out and play hard for 60 minutes or until the last whistle,” Patterson said. “Anytime you can build a football team like that, you are always going to have a chance to compete and win. They were 9-4 last year and now they are 8-3, so they have won a lot of ballgames.”

Patterson said the team has practiced well this week and Hughes said they are preparing for the triple option by working on different defensive schemes with coaches.

“We have a tough Air Force team to go against. They have really been in every game,” Patterson said. “They led BYU at halftime and were tied with Utah in the fourth quarter, so we’ve got to be ready to play.”

Patterson also said the running game isn’t the only thing he has to prepare for, he is worried about looking foolish on a long pass play while the defense is expecting a run.

“The freshman quarterback (Tim Jefferson) is a lot faster and he has really thrown the ball well,” Patterson said. “Anytime you put a guy in that position, you have to account for a faster quarterback.”

The last time these two teams met, the Falcons beat the Frogs 20-17 in overtime in Colorado Springs and Patterson doesn’t want his team out to avenge last season’s loss.

“We are playing for a chance to possibly share a conference championship and get to 10 wins,” Patterson said. “That’s what good programs do. They don’t have to play for revenge. If you have to do that, then you’ve got the wrong set of values of what you are trying to get accomplished.”

For 22 Horned Frogs this will be the last time they play at Amon Carter Stadium, but Patterson is not worried about them being too emotional.

“I worry about the same things that I do with every home game,” Patterson said. “Sometimes they worry more about who’s getting tickets and where they are sitting when they have a lot of family coming to the game. The families rely on them to get everything done, and that’s hard to do and get ready to play. I don’t worry about them trying to do too much on the field or get too high emotionally.”