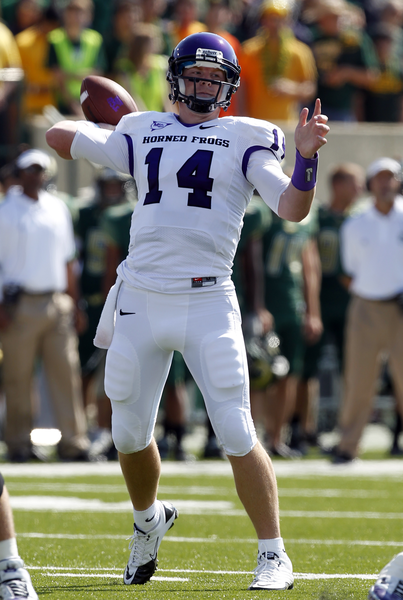 Across Fort Collins signs read, “Defend the Fort,” and the No. 5 ranked Frogs did just that by defending the Fort Worth name in Fort Collins by defeating CSU 27-0 in the Frogs first conference game of the season.

The win was the first road shutout under head football coach Gary Patterson in his ten seasons as head coach. The last road shutout was a 24-0 win in 2000 against Navy when Patterson was the Frogs defensive coordinator.

Patterson said the players and the ones responsible for the shutout against the Rams. He said shutouts on the road are hard to do and when it happens it is good for the players.

“The ones you’ve gotta be proud of is them because they’re the ones that do all the hard work,” Patterson said.

The first half was slow for both teams and the only scoring action came from Horned Frog kicker Ross Evans. Evans scored a 29-yard field goal on the Frogs first possession of the game. The field goal by Evans is the third time in five games this season that the Frogs have scored on their first drive, two of the three were touchdowns.

Dalton said the lack of points in the first half wasn’t over confidence, it was the team not executing to its full potential.

The Frogs came out strong after halftime and the defense pushed past the Rams to score its first touchdown of the game during the second half opening drive scored by sophomore Ed Wesley.

Dalton said the opening drive of the second half gave the players awareness of what they needed to do the rest of the game.

“Six points is unacceptable for this offense and with how explosive we feel we can be” Dalton said. “So we had to go out and execute (during the second half).

Last week, Wesley was out for the majority of the game against SMU after getting a concussion but returned against the Rams to score the Frogs eight-yard touchdown.

Wesley scored the Frogs second touchdown late in the third half with a three-yard rushing drive.

The Frogs strengthened their lead in the fourth quarter with a 39-yard pass by quarterback Andy Dalton to senior wide-receiver Jimmy Young.

Daltons touchdown pass to Young broke the TCU record for the amount of scoring passes in his career at 50. Max Knake held the previous record in 1995 with 49 scoring passes.

At the end of the fourth quarter senior safety Tejay Johnson forced a fumble out of the Rams that was recovered by Wayne Daniels on the TCU 25-yard line.

Patterson said the team accomplished what they needed to do in Saturday’s game by playing together.

“I was pretty proud of the guys that stepped up and played,” Patterson said. “Overall, I was happy with our protection.”