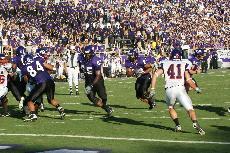 If head football coach Gary Patterson has his way, the Horned Frogs are going to play football this weekend.

Coming off a 67-7 win over the Stephen F. Austin University Lumberjacks and their spread offense, the Frogs turn their attention to the physical running attack of Stanford.

“I call that basketball.” Patterson said of SFA’s offense. “They don’t run much, and they’re throwing it all over the park. Now we’re going to play football.”

The Cardinal’s physical onslaught is led by junior running back Toby Gerhart. After tearing his ACL in the second game of last season, Gerhart has rebounded to lead the team in rushing through two games with 214 rush yards and four of the team’s five offensive touchdowns. He’s averaging 6.1 yards per carry.

Senior Anthony Kimble complements Gerhart and has added 68 rush yards in two games. He led the Cardinal in rushing last season with 509 yards and eight touchdowns.

Patterson said Tuesday he didn’t know if senior running back Brown would play this weekend. Brown has missed the first two games of the season because of a violation of university policy.

Patterson said sophomore fullback Owen Marecic is especially important to the Cardinal ground attack. At 6-1 and 246 pounds, the honorable mention All-Pac 10 nominee from a season ago blocks in front of Gerhart and Kimble.

“When they get certain personnel groups, they’re not going to try to surprise you,” Patterson said. “They’re going to run. (They say,) ‘Here’s where I’m running. Can you stop me?'”

The Cardinal racked up 170 yards on the ground last season in a 38-36 Horned Frog victory. Henson attributed the defense’s performance to poor execution and Stanford’s momentum following its win over Southern California the previous week.

“I think defensively we have to just execute our game plan and not have any mental lapses,” Henson said. “I think the big scores and big plays for them came when we had mental lapses, and they just executed better than we did.”

In the last 14 games, only four teams have managed to gain more than 55 rush yards against the Horned Frogs’ stingy run defense. The Frogs are third nationally in total defense thus far in the season.

The potential for inclement weather has caused the game to be moved from 6 p.m. to noon. Patterson said the Horned Frogs are built off speed while the Cardinal thrive on power, which may give Stanford an advantage if rain becomes a factor in the game, he said. Patterson compared Stanford’s physical play to what they’ll see in coming weeks against the Oklahoma and Brigham Young.

Henson thinks the Frogs will rise to the occasion.

“We built this defense off of speed, playing physically and playing those down and dirty games,” Henson said. “I think we’ll do nothing but respond to the physical play with us being physical. I don’t see anybody shying away from that.”