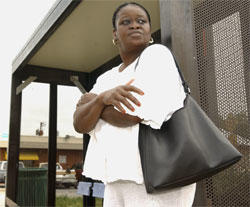 In the back of a small floral shop on University Drive, four employees, three who commute to Fort Worth from surrounding cities, sat around a table of half-arranged bouquets. One woman, Judy Prater, looked up and said among nods from the other three, “There are lots of sacrifices, some I won’t even admit.” This circle of wage-earning women picked at their lunches, which they now bring to work, with frowns on their faces as they explained the effects of rising gas prices on their jobs and their lives.

“It’s hard these days … I have an old Dodge Minivan right now, but I’m trading it in for a smaller car as soon as I can,” said Prater, a TCU Florist employee who drives about 15 miles between Fort Worth and her home in Forest Hill every day. Her co-worker, Shirly Hurst, who lives in Springtown and drives 70 miles round-trip to work every day, said, “It was never easy, but now the gas prices are killing me.”

For many low- to middle-income Americans, the recent spike in gasoline prices is literally eating away at their paychecks – what little some of them have – and some experts are saying the price increase concerns them because it’s widening the gap between the rich and the poor.

To compensate employees and continue to earn a profit, TCU Florist was forced to add a $3.95 delivery price to the TCU area. TCU Florist had been losing money on deliveries and was concerned about losing commuting employees. The problem is still not solved, employees explained, but it is a little better. Some employees have received increased salaries since the recent spike in gas prices, TCU Florist managers said.

Gas prices are a major cause for concern for workers across the country, like those at TCU Florist, some economics experts are alarmed.

“The poor and working-class are definitely effected by gas prices more than any other segment of society,” said A. F. Alhajji, an energy economist at Ohio Northern University. “They’re being forced to change their habits and their lifestyles.

“I actually see the gap between the rich and the poor being widened with the rise in gas prices because it’s making it harder for the lower-income brackets to stay afloat … and the rich are hardly wincing,” Alhajji said.

Alhajji explained that research has shown that higher-income Americans are not changing many of their habits because of the rise in gas prices.

“The rich, under any circumstances, will not change their habits,” he said. Wealthier consumers have stable buying habits because they can dip into their savings when prices go up, he said.

Fort Worth is no exception. Here, sales of Hummer H3s, which get 16 miles per gallon in city driving, were up in the first half of 2005, despite rising gas prices, said Isaac Perrez, a sales manager at Frank Kent Honda and Hummer in Fort Worth.

“The people that buy these cars don’t care about the price of gas,” Perrez said. Hummer sales at the Frank Kent dealership have stayed the same in September, he said, with an average of 25-30 Hummers sold this month.

“A major concern many experts have is that we don’t have detailed data that shows the powerful effects this rise in gas prices is having on the poor,” Alhajji said. This is a much bigger problem than many researchers are looking into, he said.

Some of this can be tracked by mass transit. Rising fuel costs have recently steered thousands toward alternative forms of transportation, many of them lower-income Americans, Alhajji said. The Fort Worth Transportation Authority and Dallas Area Rapid Transit reported strong increases in ridership this year.

In Fort Worth this fiscal year, compared with 2004, traffic on “the T” is up 8 to 9 percent, according to reports from Fort Worth Transportation Authority officials.

Experts say changes in habits of lower-income Americans – like ride-sharing, using public transportation, rethinking their driving patterns and altering their budgets – are influenced by the fact that they tend to spend a much larger percentage of their income on gas.

Michael Butler, an associate economics professor and associate dean of the AddRan College of Humanities and Social Sciences, said the lowest economic brackets in society spend the largest percentage of their income on gasoline. TCU students rarely fit into these lowest brackets, he said.

“For most TCU students, it’s really just more of an inconvenience,” Butler said.

For individuals like TCU Florist employees, it is more than just a nuisance.

“I have to really think about making all my car trips in one shot,” said Sharon Peebles, a TCU Florist employee. “These prices really make it hard to make house and car payments and live the way I used to.”

By observing a decrease in sales from stores that cater to lower-income consumers, some researchers conclude Americans in this section of society are finding it difficult to justify any extra buying.

Patrice Duker, a spokeswoman for the International Council of Shopping Centers, an industry trade association, said that gas prices are eroding the discretionary spending of lower-income Americans.

“Retailers that cater to lower-income consumers, like Dollar Tree and Wal-Mart for example, are feeling the effects of expensive gas,” Duker said. “These low-income individuals and families are getting hit the hardest, and their purchases reflect this.”

“My [pizza delivery] drivers began really grumbling a couple weeks ago, so I decided to charge customers more for delivery with the high gas prices,” said owner Richard Perrotti. “The extra charge goes straight into [driver’s] pockets – they need this extra money,” he said. “The fact that gas costs more now affects them a lot because they’re on an hourly wage.”

The spike in gas prices is increasing the price of other goods and services as well.

Perrotti has seen the price of all of his shipped foods and linens increase in price due to gas prices. “Things are hard for a lot of people right now because a lot of things are going up in price, not just gas.”

Butler said almost everything goes up in price when gas does. Anything shipped or trucked in is affected, he said.

Many Americans do not understand the real reasons they are forced to shell out more cash for gas than in the past.

“Right now, the root causes of steeply rising gas prices cannot be boiled down to Hurricane Katrina,” Butler said. Supply disruptions in the Gulf as a result of Katrina are just factors in the equation, he said.

Experts hope the prices will level out again soon. The market will work itself out, and gas prices will lower to reasonable levels again, if left alone, Alhajji said. Government influence would cause higher gas prices and an increased widening of the gap between the rich and poor, he said.

Some journalists and government officials have advised the government to raise gas taxes to encourage gas conservation and heal the market. Congressmen from states such as Alaska and Minnesota have proposed national gas tax increases. A Sept. 2 editorial in The Washington Post cited government-raised gas taxes as the solution to the high demand for gasoline.

“Government needs to stay out of this,” Alhajji said. “This will only hurt the low-income Americans even more than they’re already hurting, and it won’t solve anything.”

Many consumers do not notice the rising prices of items besides gas, but the wage earners in America notice.

“Most of them will keep driving their SUVs until mom or dad buys them a new car,” he said.

Madsen said he knows only one TCU student who seems to be worried about the price of gas.

“I always see this TCU girl drive her little black scooter around and stop in every once in a while for gas. It’s pretty cool how much gas she’s saving with that thing,” he said. “She told me lots of people laugh at her on campus, but she doesn’t care, it saves her a wad of cash.”

Madsen explained that he knows gas prices are causing some students to change their habits, but low-income patrons show the most notable changes.

“I see poorer people leaving their cars and scooters at home and taking the bus,” Madsen said. “Many of them work hard but they can’t even afford gas at all anymore.

“I hope prices go down some, at least for their sake.