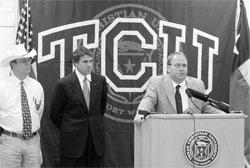 Gov. Rick Perry was planning to answer questions about the National Child Identification Program in a press conference held Tuesday at the Justin Athletic Center, but instead was questioned about the Nov. 7 gubernatorial election.Perry’s support continues to drop in the polls according to rasmussenreports.com, an online newsletter that tracks public opinion. Polls showed Perry had 40 percent of the public’s support in July and, as of Sept. 13, his support had dropped to only 33 percent.

Perry told the audience he takes all candidates seriously, but is not concerned with his recent drops in the election polls.

Historically, Perry said, there have been two major parties in elections: Democrats and Republicans. Chris Bell is the opposing Democratic candidate in this election, he said.

“Chris is probably going to be number two.” Perry said.

Perry also said the number of candidates this year, five, does not change his views toward the race.

“Every campaign has its own personality, and this one’s no different,” Perry said. “We just have more personalities. I only know how to do it one way, and that’s run real hard, stay real focused, be very disciplined, and then we’ll look around on Nov. 8 and see how it worked out.”

Before being questioned regarding the race for governor, Perry talked about child identification.

The Governor’s office is awarding $1.8 million to the Sheriff’s Association of Texas to provide child identification kits to Texas parents, so they can easily record and store their child’s fingerprints, DNA and physical characteristics, Perry said. This will aid in the recovery of missing children, he said.

Ed Smart, whose daughter Elizabeth Smart was abducted in 2002 and recovered due to the Child Identification Program, said he urges others to “be prepared, not scared.”

College students should be concerned with the Child Identification Program, Chancellor Victor Boschini said, even if only for their siblings.

“I think it is successful on a limited basis only because not enough people are doing it,” Boschini said.