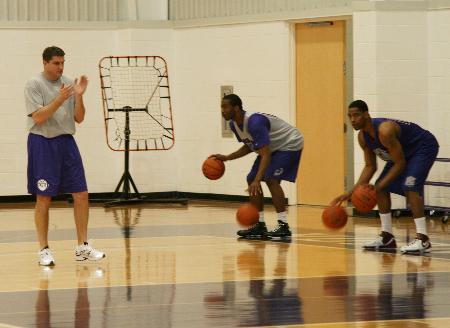 Players, coaches and future players alike all use one term to describe Jim Christian – hard-nosed.

“He shows you more,” Ebie said. “He’s more talkative with his players [than Dougherty], and he shows you how to exactly do the work step by step.”

“If there was a word that was past intense that I’m not intelligent enough to come to grips with, that’s what he is,” Ford said. “He wants to win. He wants guys that are going to play hard and just spill their guts, but he does a good job balancing. He’s got two complete personalities.”

James Blasczyk, a Friendswood native who committed to play for TCU under Dougherty in July, said his conversations with Christian have been positive.

“He’s pretty much straight-forward,” Blasczyk said. “He’s the type of guy that if you’re not doing the right things, he’s not going to beat around the bush. He’ll tell you straight up, and I like that about coaches.”

Christian said his biggest challenge centers on changing the atmosphere surrounding the program.

“Every day the challenges change, but it’s about getting the kids to believe that they can be a special basketball team and getting them to do the things that are necessary to do that,” he said. “It’s something that even if things don’t go your way for one day or one game, you have to stay the course. If those kids develop that, it’s going to be a fun year.”

Although Christian says he adjusts the team’s style to the strengths of his players, he expects to challenge teams defensively.

“I want us to play very physical,” Christian said. “I want us to compete on every possession to make it difficult for the other team, but offensively I want to give a few guys freedom to play ball. Basketball is supposed to be fun, and I want these kids to have fun playing it.”

Ford said effort is a requisite to see playing time under Christian.

“You can shoot 0 for 10 and play 40 minutes for Jim, but if you don’t dive on a loose ball, you’ll never see the floor,” Ford said. “He’ll live with the mistakes, but the effort is non-negotiable.”

One thing Christian has proven in his six years as Kent State head coach is the ability to win. He has a career 138-58 record to TCU and leaves Kent State as the winningest basketball coach in the Mid Atlantic Conference’s 62-year history. Christian has taken two teams to the NCAA tournament and made five postseason appearances in his six years as coach, earning MAC Coach of the Year twice in the past three seasons.

Christian’s road to Fort Worth has taken him throughout the Midwest, serving as an assistant coach, talent evaluator for Octagon Sports Marketing and Management, and head coach. Christian served as an assistant at Kent State, Pittsburgh University, Miami University of Ohio, Western Kentucky University and St. Francis University in Loretto, Pa., his first assistantship where he said he learned the most about coaching.

“I think I learned so much about the recruiting process there because you had to recruit so many people, and you had to try to find the ones that could fit there,” he said. “It was a place where I kind of cut my teeth, and the lessons I learned from being there carried me through.”

Currently looking for assistant coaches, Christian said he wants to hire a coach with a knowledge of Texas recruiting, but said it’s not a necessity.

Christian says he’s a simple guy who wants to meet as many people as he can, and when he’s not working at the office, he’s spending time with his 12-year-old daughter and 18-month-old son.

“I love to coach this game,” he said. “I love this game of basketball; I really do. I’m kind of obsessed with it.”