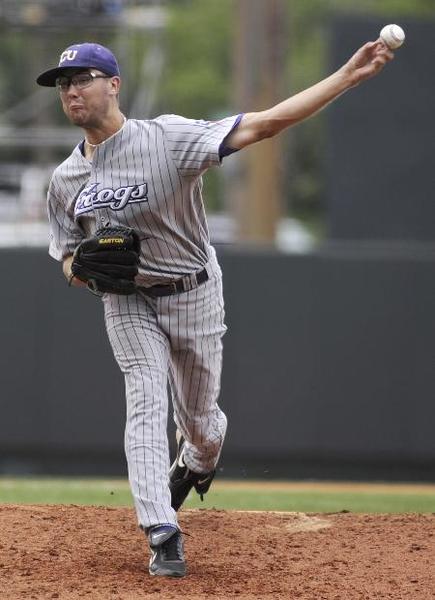 Purke leads the nation with 14 victories (14-0) with a 3.23 ERA in helping lead the third-ranked Horned Frogs
to their first College World Series appearance.

Purke’s 133 strikeouts place second for a single season at TCU, trailing
only Broadway’s 151 in 2005. Purke has allowed just 84 hits in 103 innings,
limiting opponents to a .219 batting average.

In his most recent outing, Purke surrendered just one run on three hits
while striking out 11 and walking one in a 3-1 victory at Texas in the
opening game of the Super Regionals.

Purke will start Saturday when TCU opens College World Series play at 1 p.m.
CDT versus Florida State. Purke will be making his 17th start of the
campaign, tying him for second on the Horned Frogs’ single-season chart.
Flint Wallace (1996) and Clayton Jerome (2004) hold the mark with 18 starts.

A native of Spring, Texas, Purke was named the NCBWA’s Freshman Pitcher of
the Year in addition to being a first-team Freshman All-American.