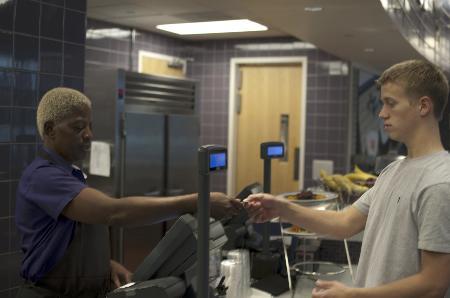 Plans to bring back the Convenience Swipe at on-campus eatery 1873 were already in action before Dining Services learned about a petition to resuscitate the option, a Dining Services official said.

The option would allow students with a meal plan who do not have dinner at Market Square between 5 p.m. and 9 p.m. to use a Convenience Swipe, which counts as a meal plan swipe that can be applied to a choice from three dishes instead of students paying extra for a meal, said Rick Flores, general manager for Dining Services.

Sophomore communications major Danny Zidell, the creator of the Facebook group and a petition for changes at 1873, said he created the group because he thought it was ridiculous that the late-night swipe option, which was available the previous year, was removed.

Flores learned about the existence of the group at a weekly Dining Services Committee meeting between Student Government Association students and Dining Services on Sept. 21 from Abbey Brokos, an SGA executive member and chairwoman of the committee. Dining Services was already working on restoring the Convenience Swipe, Flores said.

Zidell said Dining Service’s plan to bring back the Convenience Swipe is a start. The dinner swipe will remain a concern of the petition until the option is implemented, he said.

The Facebook group, “Petition for the food we deserve! Boycott 1873!,” has more than 120 members, and the online petition calling for boycott has more than 50 signatures.

Students in the group posted comments that said they didn’t think it was fair to charge 25 cents for a cup of water.

Dining Services is charging for the price of the disposable cup, not the water itself, Flores said. Students could bring their own containers for water at no charge, Flores said.

Legia Abato, marketing manager for Dining Services, said the biodegradable cups used at 1873 are made from expensive materials.

Flores said these cups were available for free in the past, but students took multiple cups within the same day and providing the cups at no charge became a cost issue.

Brokos said 1873 also had problems with the amount of time students wait to receive their food after ordering. Students waiting near the counter at the restaurant had sometimes grabbed food that was intended for other students, she said.

Brokos informed the Dining Services Committee of the problem and the restaurant was working to solve it by issuing receipts to students, Flores said.

The network piece needed to add the Convenience Swipe has been ordered, but Abato said she did not know when the system would be up and running. Dining Services is working with an outside entity to get the software that would make the dining option available later in the semester, she said.

“It is high on our priority list,” Abato said.

Dining Services has been very willing to work with the committee and listen to student feedback, Brokos said.

Students with feedback should contact Brokos or utilize the comment boxes the committee plans to distribute this semester, Flores said. Dining Services also has a Twitter account, TCUDining, and a recently launched Facebook fan page, TCU Dining, that provide opportunities for students to be involved, he said.

“We would love to have that information as to what the trends are – where students are going, what’s working, what’s not working – so we can make sure to implement that into the operation,” Flores said.

“Petition for the food we deserve! Boycott 1873!” Facebook page