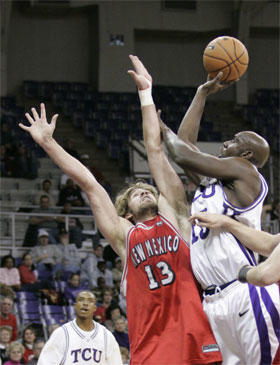 The Horned Frogs will be looking for some good defense tonight to stop an Air Force (19-5, 7-4) team that is shooting just under 50 percent from the field and 40 percent from the three-point range.Four of the five starters for the Falcons are averaging in double figures. They are headlined by senior guard Antoine Hood, who is averaging 14.3 points per game. The four leading scorers for the Falcons are also putting in a lot of time on the court, averaging 34 minutes per game.

“They have five players who can shoot well,” head coach Neil Dougherty said. “You have to find the shooters and know where they are at all times.”

Though Air Force is not ranked, Dougherty said, the team has a top-level offense, and the Frogs will attempt to make the Falcons put the ball on the floor.

“They catch and shoot the ball as good as any team in the country, Dougherty said. “We will have to pressure the ball and make them shoot off the dribble.”

Dougherty also said the Falcons are the best team in the country at scoring through assists.

“They play with a great team concept,” Dougherty said. “They always have somebody doing something off the dribble.”

Due to that ball-movement philosophy, the Falcons’ assist to turnover ratio ranks second in conference at 1.32 per game.

Senior guard Nile Murry said the team will have to take away the open looks and defend the back door cuts.

“Air Force is great team that is very disciplined,” Murry said. “They are a team that competes every night, and they play really good defense.”

The Falcons have the best scoring defense in conference play, holding their opponents to only 56.7 points per game.

The last time these two teams met Jan. 14, the Falcons beat the Frogs 75-49 in Colorado Springs. Not one Frog scored in the double digits; senior forward Judson Stubbs led the way with 9 points.

Dougherty said despite the team’s low offensive production earlier in the year, he thinks the team took good shots – it just didn’t make enough of them.

The Frogs shot 33 percent from the field in their last game against the Falcons, slightly lower than the season average of 35 percent.

Dougherty said TCU will have to be aggressive to come out with a victory.

“We need to get the game in transition with some timely defensive stops,” Dougherty said. “Also, we need to continue to attack the rim, and get to the free throw line.