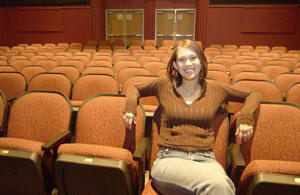 Many young playwrights dream of having their names in lights, but for one student, the dream has become a reality. “I didn’t know what to think. I was really excited,” said Hillary Benefiel, a sophomore English major. “I didn’t expect to hear back from them after I submitted my play.”

Benefiel’s one-act play, “Invincible,” is being produced by the Kennedy Center American College Theater Festival. The San Antonio native, is the first TCU student to receive such an honor selected by a panel of judges.

“Invincible” focuses on two brothers and their journey from early childhood into their adult lives. The play also chronicles the youngest brother and his vivid imagination of believing himself to be a superhero, Benefiel said.

Assistant theater professor Thomas J. Walsh said he is pleased with the success of Benefiel’s writing.

“Hillary is a very talented and insightful student,” Walsh said.

Benefiel wrote the play for Walsh’s playwriting class. Students were asked to turn in five pages of script a week and submit the final copy into the festival.

Walsh, who has been with the TCU theatre department for seven years, said that to his knowledge, Benefiel is the first student to have received the recognition that Benefiel has with her play.

Daniel Coleman, a senior radio-TV-film major and a friend of Benefiel, said he is not surprised by Benefiel’s success.

“Hillary’s writing is not for the casual reader,” Coleman said. “She has always intended on making this her career.”

Coleman said Benefiel’s writing style is psychological, focusing on people’s thoughts and feelings. “It’s just something that I feel like I was meant to do,” Benefiel said. “I’m at home at most when I’m writing plays.”

The play will open its run in Tulsa, Okla. Benefiel said there has been no date set for opening night or how long the play will run.