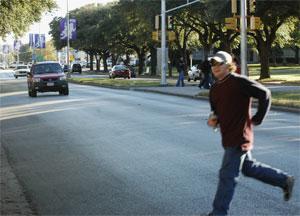 Mothers always tell their children to cross the street on a crosswalk. But they may not have said that failing to do so could get you a ticket.Although jaywalking tickets are rare, TCU Police encourage students to be careful while crossing the street, said J.C. Williams, assistant police chief.

Williams said there havn’t been many complaints in the last year about students crossing the street improperly but said he thinks jaywalking is still a concern.

“We wish students would really consider the safety issues and obey the traffic devices,” Williams said.

TCU Police Chief Steve McGee said jaywalking is when someone crosses the street with no crosswalk or street light.

TCU Officer Pam Christian said many students do not pay attention before they cross the street. Christian said there have been incidents in the past years, but nothing serious enough to require more police coverage.

Fort Worth Police Officer Kirk Byrom said jaywalking can be enforced anywhere in the city at any time, but if there are no complaints, police forces focus on more pressing issues.

According to Internal Affairs in Fort Worth, there have been no official complaints filed on TCU’s block of University Drive in the last six months.

Williams said that because University Drive is under the Fort Worth Police Department’s jurisdiction, TCU Police can only monitor the situation and encourage students to be careful.

Christian said the Fort Worth Police Department doesn’t put a lot of officers on jaywalking. She said it would be unfair for the police to target the TCU area for jaywalking if it is not addressed in other areas as well.

“Once you write one, you’ve got to write them all,” she said.

A jaywalking ticket costs $144.00, according to the Fort Worth Municipal Court.

Ryan Butts, a TCU graduate, said he jaywalked while he was in school, but it was only because it was more convenient than walking out of the way to a crosswalk.

Butts said he does not think there can be anything done to curb the problem, especially since many students don’t pay attention while crossing the street.

Cell phones cause many students to pay little attention to their surroundings, Butts said.

Williams said it is a challenge to have complete compliance to traffic laws.