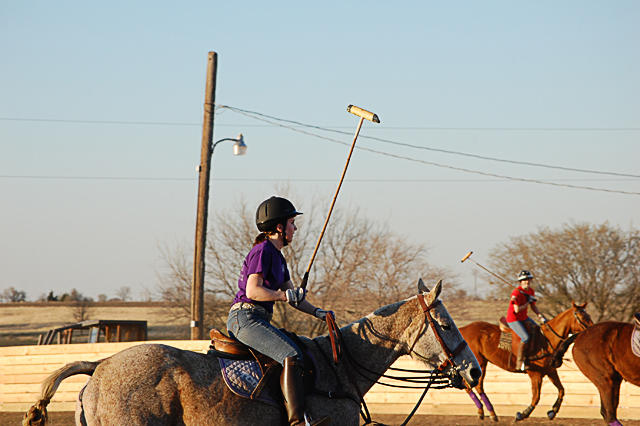 The TCU Polo Club has always had an open door policy, but increased interest in the program has led to tryouts for placements this year. The team was ranked third in the region after beating Texas Tech, the University of Texas and Oklahoma State University.

Club members experienced some heartache when they lost to SMU in the last minutes of a match this year, but even more so when they lost their long-time practice facility, Brushy Creek Polo Ranch.

The ranch hosted regional tournaments and summer camps. When the owner retired, his children sold the ranch because it was too hard to maintain, said Robin Sanchez, head-riding instructor at the ranch.

They weren’t sure where they would go until a TCU alum, three miles from Brushy Creek, offered them access to a private facility.

Lauren Kiser, sophomore political science major and club president, said there are a lot of expenses they didn’t have at the old facility.

“We have to buy hay, fix the fences, buy more bridles, saddles, boots, basically everything,” she said.

Another new cost is travel. Because the arena doesn’t meet the size requirements for official competitions, regional tournaments are being relocated to the Las Colinas Equestrian Center.

It’s a 45-minute commute from the university.

“We’ll be fine for a little while, but it’ll definitely be harder than it was at Brushy Creek,” Kiser said.

Despite the changes and the uncertainty, Kiser said the team was thankful to be offered a practice facility that was still pretty close to the university and they were looking forward to the future.

“Brushy Creek was home,” she said. “It meant a lot to a lot of different people, so the emotions are mixed.”