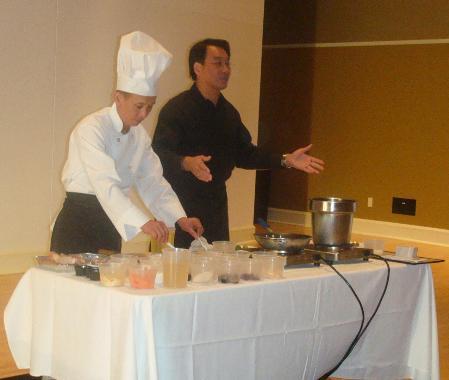 Chow’s cooking demonstration marked an end to the Ang Lee Film Festival, a three-day event that explored the works of Academy Award winning film director Ang Lee. Lee’s film, “Eat Drink Man Woman,” explored the ties between food and relationships and was the last film shown Sunday. May Dragon catered dinner for those who attended.

Kyle Lucak, a junior political science major, said the festival taught him aspects of Chinese culture that cannot be learned in the classroom.

“I’m taking Chinese foreign politics this semester, but it’s hard to actually get a feel for the small things about a culture while sitting at a desk or taking a test,” Lucak said. “Watching films from that country and getting to hear people speak and demonstrate aspects of their culture is the next best thing to actually visiting that country.”

On Sunday 148 people watched Lee’s film and attended Chow’s cooking demonstration. The event was also a forum for an unofficial visit by Joseph Chen, the deputy general of Houston’s Taipei Economic and Cultural Office.

The Taipei Economic and Cultural Office is the equivalent of a Taiwanese consulate, but because of recognition issues between the People’s Republic of China and Taiwan, the United States does not recognize it as a consulate.

Carrie Currier, director of Asian studies and assistant political science professor, said the Ang Lee Film Festival was a positive event for the university because it exposed students to members of the Taiwanese community and gave them the chance to interact firsthand with individuals of another culture.

“Students get exposed to different cultures through film, and in (Chow’s) case, cuisine as well,” she said. “For those who cannot go abroad, (the film festival) was a nice sampling of what another country has to offer.”

The Ang Lee Film Festival was sponsored by the university’s Asian Studies program, KinoMonda World Film Series and the Taipei Economic and Cultural Office of Houston.

More information on May Dragon can be found at www.maydragon.com.

Place chicken in wok. Stir well for 15 seconds. Place sesame oil on chicken. Dish out and sprinkle with sesame seeds.

Add salt and white pepper. SautÃÂ© and stir well. Dish out on to the plate bedded with rice vermicelli.