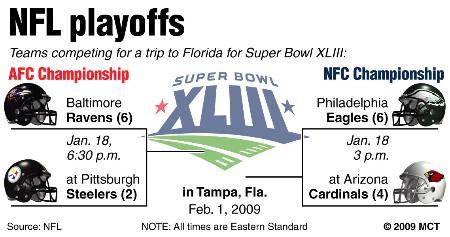 Sunday’s first championship game features two teams that few could have predicted would meet at this point in the season.

Almost two months ago, Eagles quarterback Donovan McNabb was benched during a 36-7 blowout loss to the Baltimore Ravens. His team fell to 5-5-1 with the loss.

With the quarterback position suddenly up in the air, any chance of acquiring a playoff berth seemed out of the question.

So much turmoil so late in the season makes the team’s turnaround even more remarkable.

McNabb has thrown 11 touchdown passes and only four interceptions since his benching in late November, and the team has won six out of seven games, including convincing wins over the Minnesota Vikings and the New York Giants in the first two rounds of the playoffs.

The Arizona Cardinals, winners of the NFC West, have been a perennial laughing stock in the NFL and haven’t made the playoffs since 1998.

But under the leadership of head coach Ken Whisenhunt and with the arm of two-time league MVP Kurt Warner, things have changed for the once hapless Cardinals.

They are coming off of a dominating win on the road against the Carolina Panthers and are hoping to continue their great play at home this weekend.

As far as the actual game is concerned, you can expect a high-scoring affair with each team attacking the other through the air. Weather will not be a factor thanks to the Cardinals’ indoor stadium.

Look for Cardinals’ wide receiver Larry Fitzgerald to have another dominating performance after exploding for 267 yards and two touchdowns in the team’s first two playoff wins.

But despite the Cardinals’ home-field advantage and high-flying offense, I still see the Eagles doing just enough on both sides of the ball to pull out the win. The team has been on too much of a roll to be stopped in Glendale.

In what is sure to be a smashmouth, grind-it-out, old-school football game, Sunday’s late matchup features two divisional foes as well as two of the league’s best defenses.

Early weather forecasts call for temperatures in the 20s with a possibility of snow showers. The weather situation should benefit the Steelers, who have had their fair share of cold-weather games this season.

Look for each team to try to control the time of possession by running the football. If conditions end up being poor, the Ravens will rarely test the air with rookie quarterback Joe Flacco, who has done well managing games for his team in the playoffs. Flacco must not turn the ball over if Baltimore hopes to have any chance of winning the game.

Running will be the theme of this game, and I see the Steelers doing a better job than the Ravens of stopping it. A healthy Willie Parker, who ran for 146 yards and two touchdowns in last weekend’s win over the San Diego Chargers, should give the Steelers an advantage when pounding the football.

If the Ravens want to win Sunday’s game, it’s defense will have to come through on multiple occasions. Defensive touchdowns are a Raven specialty, especially with All-Pro safety Ed Reed patrolling the secondary.

Steeler quarterback Ben Roethlisberger’s experience will give his team another added advantage. He may throw an interception or two, but the one thing Roethlisberger always seems to be able to do is win. As the youngest quarterback to ever win the Super Bowl, he has a 6-2 record in the postseason and has directed seventeen game-winning drives during his short career.

The Steelers are looking to down the Ravens for the third time this season. They won the previous two games by a combined seven points, so a similar result should be expected this time around.