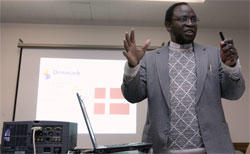 The problem with recent cartoons of the Islamic prophet Muhammad lies not in their publication but rather in the spirit of intolerance and misunderstanding behind them, a religious expert said in a speech Wednesday.The cartoons that were originally published in Danish newspapers and, more recently, reprinted in other papers around Europe and other parts of the world featured Muhammad promoting violence. Yushau Sodiq, associate professor of religion, said the spirit of these cartoons is the heart of the problem.

“The problem actually is incitement of the prophet of Islam,” he said.

Although freedom of the press is a good thing and necessary to having a well-informed society, Sodiq said, newspapers should exercise more restraint and think about the consequences before printing some offensive material.

“We have the freedom to publish whatever we want to publish, but that doesn’t give us a license to cause harm to others,” he said. “If we do, then the result would be very, very terrible.”

Sodiq said it is both interesting and admirable that the American press has, for the most part, kept out of the debacle with the Muhammad cartoons. “These papers are thinking about the consequences of publishing those cartoons in the United States,” he said.

If publishers do continue to print cartoons and articles like these, they will be promoting further intolerance and fear of Muslims, Sodiq said.

“It will become the common debate in the community, and everybody will be looking for Muslims to do something very terrible,” he said.

Sodiq said such attitudes fueled American sentiments toward Muslims after Sept. 11, when many followers of the religion were discriminated against despite having done nothing wrong. He said recent events in Denmark have been similar to those American actions.

“Those Muslims who live in Denmark, (the government has) begun taking them away and putting them in jail, suspecting them of being members of al-Qaida or Islamic fundamentalist groups in Egypt, which was not there before,” he said.

Sodiq said some of the Danish government has held the idea that imprisoning the Muslims in that country will keep news of these events from getting to Muslim countries, but this is simply not the case.

“After Sept. 11, Al-Jazeera television in the Arab world has become a primary source of news,” he said.

Sodiq also said that in order to remain peaceful, Muslims and non-Muslims need to be more tolerant of one another.

“The idea of freedom of religion is to allow us to worship God in any way you want to worship him” and to respect how and whom others want to worship, he said. “What makes one (religion) superior and (another) inferior?”

He said education is another vital component of maintaining peaceful relationships between different members of the community.

“The most important thing is to educate people of what Islam is and to teach all people that violence doesn’t bring any peace,” he said. “Using violence against violence does not bring anything to the community.”

Associate professor of education Nancy Meadows echoed Sodiq’s statements, saying many of her students do not realize that Islam is a peaceful religion.

“I’ve had numerous comments from students who believe what they see on CNN or Fox News, and don’t have any knowledge of Islam beyond what they see in the news,” she said.

Rita Cotterly, an adjunct faculty member in the kinesiology department, said she appreciated the speech because it made her more aware and understanding of facts surrounding the cartoons and subsequent protests. She also said she appreciated Sodiq’s message of nonviolence.

“I agree with the speaker that peace is the answer, but that we have to be fair and willing to sit down at the table and stay at the table until we can reach a peaceful compromise so people can live together,” she said.

The speech, which was sponsored by Inclusiveness and Intercultural Services as part of its Monthly Luncheon Forum series, was attended by a full dining room of students, faculty and staff members, as well as other community members.

“I think it’s beneficial to the TCU community even though it doesn’t affect us directly,” she said.