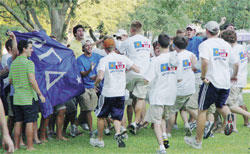 Natalie Henry, a freshman ballet/modern dance major, agreed with the results of the survey.

“Everywhere there is something Greek, like signs or different activities, going on,” Henry said.

The Princeton Review, a company that annually surveys 115,000 students at 361 universities about their schools, with questions on anything from “Best Professors” to “Top Stone-Cold Sober School” to “Best College Library.” According to its Web site, the 80-question survey asks students about their schools’ academics and administrations, campus life and student bodies.

The Princeton Review was not available for comment on how the surveys are conducted, but according to the Web site, rankings are based on 300 student surveys.

Ray Brown, dean of Admissions, said many students look at books and magazines such as the Princeton Review and the U.S. News and World Report rankings because they think they are interesting; however, he said, the results of the rankings do not affect the application process.

“The students that are applying to the more highly selective schools look at rankings, but there are better tools to use to research universities,” Brown said.

Sophomore music education major David Weuste said that he read the current and past Princeton Review surveys but the results did not affect whether he came to TCU.

In regard to fraternities and sororities, Brown said students he has interviewed usually know whether they will become a part of Greek life prior to being accepted to a university.

TCU has 17 cultural organizations said Fred Williams, a student who works for the Inclusiveness and Intercultural Services office, including minority Greek organizations, as well as the National Association for the Advancement of Colored People and Organization of Latin American Students.