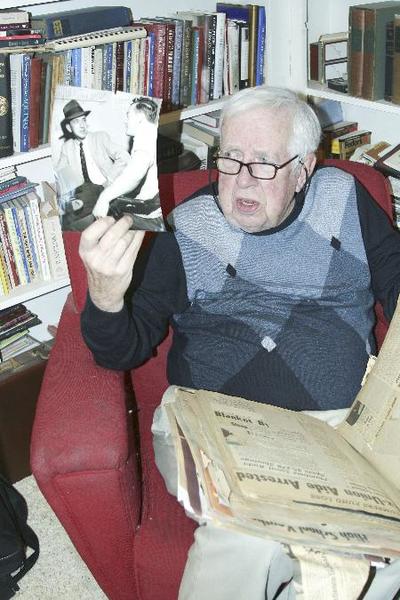 During the Christmas season in the 1950s and 60s, Phil Record, who was working the crime beat for the Fort Worth Star-Telegram at the time, would receive a bottle of Wild Turkey Bourbon from the funeral homes that operated the emergency ambulances.

Funeral home operators would thank Record for mentioning their establishments in crime stories as they offered a liquid token of their appreciation.

“Of course, they were hoping I would give them an extra mention in the paper or ambulance call, but I never did,” Record said.

At the time, receiving gifts such as a bottle of bourbon, a free ride to an out-of-town Dallas Cowboys game or even a sports coat from Neiman Marcus were all part of working in the newspaper business, Record said.

Today, Record, a professional in residence in journalism ethics at TCU, views the act of accepting those gifts in a different light, something he stresses in his ethics class.

“The perception of a conflict of interest is just as damaging to your credibility as an actual conflict,” Record said.

In the corner of the study in his Wedgewood home, Record, a Fort Worth native, carefully turns each aging page of his 108-page scrapbook. The book is well-worn, held together by a single metal bracket near the top of the binding, the lower bracket long gone. Inside the cover, trimmed with a fraying red ribbon and covered with the material from an old Star-Telegram umbrella – which resembles a newspaper more than an umbrella – contains Phil Record’s work, covering almost a half century in the newspaper business.

Although the book contains much of Record’s work over the span of his 43-year career at the Star-Telegram, one specific article was intentionally not included.

In the early ’60s, Record was the senior police reporter for the Star-Telegram and was accustomed to getting the first tip on a story. But one evening, while reading the day’s paper in his office in the basement of City Hall, he found a story in the Fort Worth Press that he did not have.

“Mason Lankford, the local fire marshal, tipped it off to my competitor at the Fort Worth Press and it really teed me off,” Record said. “I thought, ‘Hey, if you want to be in good with me, you better take care of me.'”

As he sat back in his chair, he thought to himself “I’ll get him back.” A few weeks later, he got his chance after a gasoline truck in Mansfield exploded and killed four people.

“Mason was so excited down there and I had my tape recorder with me and he used a lot of bad grammar,” Record said.

Normally, Record would paraphrase what Lankford said, but instead he “just quoted him down the line.”

“My motive wasn’t to inform the public, it was to hurt Mason Lankford,” Record said.

Almost 50 years later, Record cited that as the only thing he still has a guilty conscience about.

“Malice aforethought,” he calls it. “That article isn’t included in here because I’m just too ashamed of it,” he says quietly.

That experience showed Record just how powerful the printed word could be and would help shape his outlook on the role of ethics in journalism.

In 1963, Bob Schieffer, the future moderator of CBS’ “Face the Nation” and a TCU alumnus, started as a police reporter for the Star-Telegram, replacing Record, who had been promoted.

“We all tried to look like cops and Phil had always worn a hat – usually a black or dark blue snap-brim hat – because most of the detectives wore a hat,” Schieffer said. “When I went to work on the night police beat, the first thing he said to me was, ‘Get a hat.'”

Schieffer said Record told him that’s how people dress in the police beat and he should blend in.

“In that day, we never told people who we were unless they asked,” Schieffer said. “We never lied about who we were, but we just never got around to telling them who we were.”

In 1971, Record, who had recently been promoted to the job of city editor at the Star-Telegram, applied to attend a two-week journalism conference for city editors at Columbia University hosted by the American Press Institute.

“All I knew was I wanted to be the best (city editor) I could and I knew that would help me,” Record said.

Little did he know that an ethics lecture by Paul Snelson, director of the program, would spark a fiery passion for ethics in Record that would change the course of his career.

During the lecture, Record remembers Snelson saying, “What we have to remember is that people invite us into their homes and we should act like guests and not like intruders.”

It was Snelson’s lecture that really sparked his interest in ethics.

“We were the front-line editors and we needed to do a better job,” Record said. “We needed to do a more ethical job. There were still people writing columns with phony sources.

We needed to clean up our act and I just took that on and decided right then that I would be a really tough editor on ethics,” he said.

As city editor, Record created a rule that reporters had to double check any phone number they ran in the paper.

“People don’t have to talk to us,” Record said. “So, thank God when they did.”

Record sees those times as a different life – one that was a lot more fun, he laughed.

“I considered myself a very ethical reporter at that time by those standards,” he said.

Now, Record stresses the importance of being upfront and letting people know they are talking to a reporter, a change since his early days as a police reporter.

Throughout his career, Record influenced the ethical standards of journalism both nationally as president of the Society of Professional Journalists and as ombudsman of the Star-Telegram.

As president of SPJ from 1983 to 1984, Record decided to make it his goal to raise the ethical standards of journalism. He accomplished this by helping to revise the SPJ code of ethics.

During his time as ombudsman for the Star-Telegram, Record wrote daily internal memos that were sent to everybody from the publisher to the copyboy, memos that talked about what the readers had told him that day and his own thoughts about the day’s product.

Wes Turner, former publisher of the Star-Telegram, turned to Record as a source of honest advice.

“I knew him as an honest person and a person who was well-respected by his peers,” Turner said. “If there was a problem he recognized it and dealt with it head on, there was no nibbling around the edges.”

While his views would occasionally “get a person’s nose out of joint from time to time, his columns were not criticism for the sake of criticism, they were constructive,” Turner added.

Record recalled that at the beginning of his job as ombudsman, “there was great suspicion among the staff that I was going to be a tool for the publisher. After a short time, the staff came to like the position because they could see that it was helping their credibility.”

“I would come out at 2 p.m. every afternoon with my marked up papers and go to every desk,” Record said. “I made it a point to pass every desk in the newsroom and if anyone was mad or thought I was unfair to them we’d have it out right there.”

After Record retired as ombudsman for the Star-Telegram on Dec. 31, 1997, Tommy Thomason, former director of the Schieffer School of Journalism, was at Record’s door asking him to come teach ethics at TCU.

“I began to bug him almost immediately,” Thomason said.

Even at Record’s retirement party he was courted by several universities including Texas Tech University, University of North Texas and University of Texas at Arlington – as well as TCU.

Looking Toward The Future

Finally, Record decided that he would take six months to do nothing but sleep late and after his hiatus he decided to teach at TCU. While he could have made more money at other universities, Record knew he would have much greater freedom teaching ethics at a private school.

“God is involved in ethics, so I knew I would have much more leeway, and I lived 20 minutes away.”

Record’s experience brings something different to the table.

“A lot of people get to write about ethics from a theoretical perspective, but Phil spent half a century in the newsroom,” Thomason said.

Schieffer said his experience on the police beat helped his personal understanding of ethics.

“There are any number of issues that will come up on the police beat that are real life issues and life or death issues, and you have to make instant judgments about them,” Schieffer said. “That just doesn’t happen to you on any other beat.”

“It’s that kind of real-world experience, that is the reason Phil can bring things to the classroom that maybe some others couldn’t,” he added.

Thomason said even though Record is 80 years old, his perspective and passion is young.

“You don’t learn that,” Thomason said. “You either have it or you don’t, and Phil has it.”