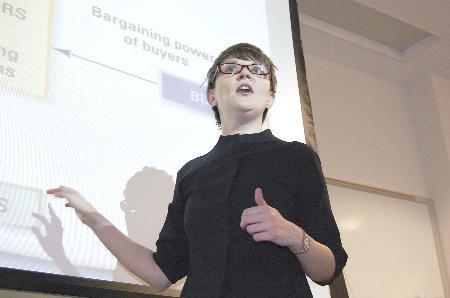 A business professor’s research is sparking new interest in the disclosure of CEO health information.

Alexa Perryman, assistant professor of management, researched and wrote an academic paper on how different firms handled CEO illnesses over the past decade.

Perryman said three other authors researched and wrote “When the CEO is Ill: Keeping Quiet or Going Public.”

“We thought this would just be a topic that everyone could understand … and have opinions on,” Perryman said.

She said their focus was not specifically on Jobs, but whether or not the Securities Exchange Commission should classify the health of CEOs as a material fact.

“Steve Jobs had been sick previously with pancreatic cancer, but not all companies are that open about disclosure so we just thought it was a timely, interesting, relevant topic,” Perryman said.

Perryman said she doesn’t think minor ailments need to be disclosed. However, she said if an ailment is serious enough to affect the quality of one’s day-to-day work, then companies should let investors know.

“If it’s something that can shorten your life or has high risks like cancer or something to that effect, then yes, I think they should be required to disclose that,” Perryman said.

When Jobs’ story unfolded, Perryman said, the circumstances aligned with their research.

“We happened to use Steve Jobs as an example because it was current at the time,” Perryman said. “We had no idea that it was actually going to be a continuing story with Jobs, so it was just a lucky break.”

Perryman said Apple Inc.’s decision not to disclose the severity of Jobs’ health problems may have had an adverse effect on consumer opinion.

“To some degree there’s a sense of connection with Steve Jobs in terms of seeing him on the commercials and seeing him on press and radio and things like that,” Perryman said. “So when he wasn’t forthcoming, I do think that hurt their reputation a bit.”

Bloomberg.com reported that Apple Inc. is under investigation to determine whether the lack of disclosure regarding Job’s illness was misleading to investors.

John Heine, spokesman for the Securities Exchange Commission, declined to comment on whether an investigation is taking place.

Elizabeth Montalbano, senior writer at IDG News Services and author of the PC World article that included Perryman’s research said Perryman’s paper was a timely and interesting perspective on a hot topic.

Montalbano said she agrees there should be a law pertaining to health disclosure from celebrity CEOs in particular.

Whatever the end result is for Apple Inc., Perryman said, she will continue to focus on the actions and behaviors of CEOs, top management teams and boards of directors.

“Being in business, it’s just extremely relevant,” Perryman said. “It’s current and it’s constantly changing so you always have to keep pace, and to me that’s fun.”