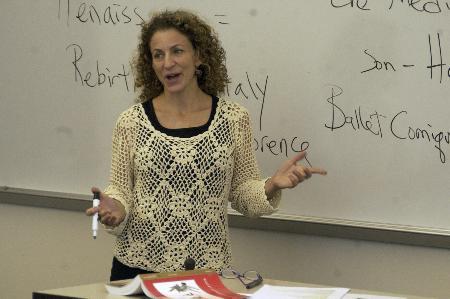 Her father was never supportive of her dancing.

Her father seemed to point out the downsides to dancing, such as the short life span of the career, possible injuries and a cliche career path for women.

It wasn’t until she was 30, when Suki John choreographed an emotional piece, that her father finally supported her decision.

The ballet John choreographed hit home for her and her father, because it was about the Holocaust, which John’s mother and grandmother survived years ago.

John said her family’s background is what motivated her to do something with her life, because she knows it’s likely that she may not have been here today. John dances because she feels it is meaningful to her life and to others, and it is also what she loves to do.

John wanted to tell her family’s story through dance. Her mother and grandmother are Holocaust survivors, and her father was an American G.I. during World War II.

John’s grandmother and mother were placed in the Bergen-Belsen concentration camp.

John said she was staying in Budapest during the time she choreographed the Holocaust ballet, which was where her family was from and where people understood the experience.

She said her father came and saw her ballet and finally accepted her passion for dance. When the former Yugoslavia dance company was not going to perform her ballet because they did not like the movements, she had to convince the dancers that the ballet was about the Holocaust and not meant to be pretty, but emotional.

This also showed John’s father that dance can be serious, which allowed him to finally take her dream seriously.

“He came right when things were falling apart,” John said. “But he said the dance was really good and saw dance as real, not for princesses.”

One day, John asked her mother, “Why am I doing this with my life when there are so many problems in the world?”

Her mother said when she was in the concentration camps she would think about beautiful things, such as music and dance.

John said her mother told her, “It’s not enough to stay alive for just bread and shelter, but you stay alive for things that make life worth living.”

John’s mother had wanted to be a dancer but was born with back problems. However, her mother started a dance class while she was in the concentration camps during the Holocaust. It was a way to keep the children distracted and busy.

Her mother always supported her love for dance, John said. Her parents took her to ballets and musicals when she was young, which made her interested in classical ballet, John said.

She started dancing at age 5 when she took her first class in body movement in New York.

“I wanted to be a ballerina,” John said.

However, as she got older she became more interested in theatre and dance and the “interaction” between the two. She enjoys the singing, dancing and acting they both entail.

“I’m so curious about dance and dance history,” John said. “These things are so interesting to me. I’m constantly learning.”

John said she has a great passion and love for dancing, theatre and teaching, which is why she now teaches at TCU.

She said she wanted to work with accomplished faculty who could help her become a better teacher.

“She has a lot of experience and she knows a lot of dance history and research,” SolÃÂ³rzano said.

Having wanted to be a classical ballet dancer since she was child, she received a part in Sleeping Beauty at a ballet company in Paris. But the part did not help her get into the company, and she soon realized that this is not what she wanted to pursue.

“They wouldn’t let me audition for the company because I was too short,” John said. “That was it for me for classical ballet.”

While feeling separated from the classical ballet world, she became interested in modern and Cuban-modern dance, John said.

She chose to never stop dancing despite her many challenges.

One of her biggest obstacles was overcoming chronic tendonitis, which stopped her from dancing for two years, John said.

She was a graduate student at NYU when her ankles began to hurt so badly she could barely walk.

After going to doctors and therapists, she was diagnosed by her ballet teacher who figured out the problem and how to fix it.

“It was an inflation of the tendon in both ankles due to years of overuse, abuse and misuse of the body,” John said. “I was dancing with a non-structured body.”

This did not keep her from dancing. She stayed in school and focused on other things, such as dance history, journalism, and video and camera work. Her injury did not hold her back from dancing at her school, she said.

When John got better, she had to re-learn her ballet technique.

“I got very discouraged, but I never lost the desire to dance,” John said.

After her injury and finishing graduate school, she became skilled in the unique genre of Cuban-modern dance.

“Cuban dance is so different and the professional dancers there are extraordinary,” John said. “It turned me around.”

Solorzano said the dance department never taught Cuban modern dance until now, and she enjoys it.

John said she believes dance is an international language and an experience that hits home to make people think and be inspired. Dance can touch someone on many levels, she said.

She said her unique heritage and background motivates her to make dance meaningful and to teach others about dance and dance history despite the obstacles.

“My mother wanted me to do what she couldn’t do,” John said, “She wanted me to help keep the world a beautiful place.”