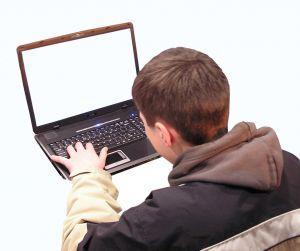 Attention classtime Facebookers: professors have noticed your glazed-over eyes and have started retaliating by creating laptop policies for their classes.

David Sandell, an anthropology professor who has banned the use of laptops in his class, said the university’s extensive Wi-Fi system has created opportunities for students to preoccupy themselves during class. He said students who use their computers strictly for note-taking purposes are in the minority.

“Students who abuse the classroom time by using their computers for reasons other than taking notes have ruined it for the rest,” Sandell said. “That’s unfortunate.”

Taking the time to correct students who are using their computers inappropriately during class is a distraction and may be considered rude on the professor’s part, Sandell said.

“I want to take the approach that we’re all adults,” he said. “In my classes, laptops are banned and then I always say, ‘If this is a problem for you just approach me.'”

Rebecca Jordan, a management lecturer, does not allow students to use a laptop in her class if she has caught them using it to surf the Web. Jordan said she believes students should be able to use laptops for note-taking in class. It teaches the practice of using technology appropriately, a necessary skill in the professional world, she said.

“Our students need to be proficient in using computers,” she said. “In every business meeting that you go to, everyone is going to be using their laptops. I see it as our responsibility to teach students about appropriate laptop use.”

Jordan said professors have a responsibility to set the standards for their classrooms.

“I think a lot of (students) get on Facebook or other social networking sites rather than taking notes,” Javeed said. “Maybe wireless Internet access should be taken out of classrooms.”

Provost Nowell Donovan said the university does not currently have an all-inclusive policy about the use of laptop computers in class. Donovan said he has no problems with the use of laptops in the large geology class he teaches for freshmen. He estimated that 10 percent of the class uses laptops.

“The issue has not been raised with me either by faculty (or) students,” Donovan said.

Kelsie Johnson, the student body president, said the issue has not been brought up during her two and a half years in Student Government Assocaition.

“I think that for students, it sometimes helps to take more streamlined notes,” she said. “But it can also be a huge distraction if students are taking advantage of wireless in classrooms.”

Johnson said that since professors frequently utilize Wi-Fi in class, she wouldn’t agree with taking the network out of classrooms.

David Bedford, the chair of the Faculty Senate’s Student Relations Committee and a Spanish professor, said the use of laptops in the classroom has not been brought up as an issue during his six years in the Faculty Senate.

Bedford said he doesn’t allow laptops in his classes because he believes the dynamic of conversation is especially important in a language class. The stress on dynamic and pronunciation that applies to his classes may not necessarily apply to other classes, he said.

Sandell said students who are used to electronic note-taking should speak to their professors about class policies that prohibit the use of laptops.

“If you are a student who really depends upon the computer as a tool, then I would simply approach the professor and see if he or she can make an exception,” he said.