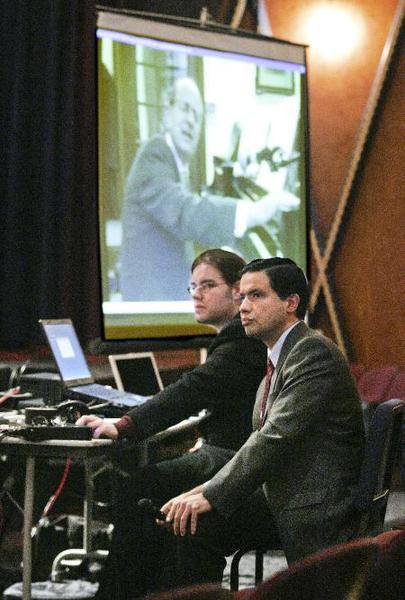 Jose Feghali locked himself in a room, fidgeted with his mind and played with his computer when his project didn’t live up to his expectations.

The university artist-in-residence, piano professor and self-proclaimed geek wasn’t satisfied with the sound quality of the software he was using during a class he conducted between the university and London’s Royal Academy of Music in 2008. He said he wanted people to experience music in its best quality regardless of technology and distance.

When Feghali contacted the former programmer for Microsoft’s ConferenceXP, a video conferencing program he was using for the class, he told him that the program was not capable of working with uncompressed audio, which produces the best possible sound quality.

“I took a weekend off from my life,” Feghali said.

“A piano player discovered something. It was unusual, and [he] didn’t believe,” said Feghali,

Feghali has appeared on stage in more than 800 performances worldwide, including Carnegie Hall in New York City. He has played with orchestras such as the Berlin Philharmonic, the London Symphony Orchestra and the National Symphony Orchestra in the U.S.

As Feghali’s fingers promenaded the keys of the grand piano in his studio, Schumann’s “Fantasy” in C major serenaded the closed room filled with his technological toys – audio mixers, computers, microphones and cameras. Feghali’s brief performance reflected his passion. His head gave a nod to every note he hit, his cheek muscles moved up and down and his eyes closed with an expression as if he was reaching the highest point of satisfaction.

“To be able to have a life in music is very sobering,” the 1985 gold medalist of the Van Cliburn International Piano Competition said. “You’re a part of a very, very special club.”

The narrow corridor of the John Giordano Piano Wing of the Walsh Center for Performing Arts – with piano music from closed doors of the practice rooms welcoming every passerby – leads to Feghali’s studio. With legs crossed and his glasses hanging on his shirt, Feghali talks in bytes and megabytes, disclosing his intimate relationship with technology.

Looking at the gadgets at his father’s factory that manufactured bicycle rims, metal cabinet bearings and caster wheels in Rio de Janeiro and trying to figure how the audio and the speaker worked in a recording machine his father handed him triggered Feghali’s initial interest in technology.

His mother, Aurea Feghali, recalled that as a child, her son enjoyed playing with electronic kits, chemistry sets, walkie-talkies and reading about science. Talking to her son from Brazil, who translated her words from Portuguese, she said he opened up televisions and other electronic appliances to figure out how they worked.

As a teenager, Jose Feghali spent the time he had between piano practices in his London apartment in Belsize Park, flipping every page of Electronics Today International, Scientific American and PC Magazine to assemble a computer. Gifted with an inquiring mind and intense interest in technology, he set up his first working device: a metronome, which is used to establish a steady tempo in music performances. He assembled his own home computer. He also repaired his car, his motorcycle and his refrigerator to save time, money and improve his mechanical skills. He still fixes his 1973 microwave because there are no available replacement parts.

Since then, he has been working – but failure to finish projects and get results keeps Jose Feghali’s mind on the run.

“Once something doesn’t make sense to me, it drives me nuts,” Jose Feghali said. “It keeps me awake all night.”

In 1989, he experimented with the Turtle Beach sound card, one of the first available cards for PC that converts the sound into CD quality — 16 bits, 48 KHz – on the computer.

Videon, who has known Jose Feghali for a year, corresponded via e-mail until he met him at the Internet2 Performing Art Workshop in Miami in January. Videon commented on Feghali’s modesty when it comes to expertise.

“He consistently tells me, ‘I’m not a programmer,'” Videon said.

Using the Internet2 technology, an advanced network application and technology used for educating and high-speed data transfer, Jose Feghali has conducted graduate classes that give students an opportunity to learn from the professionals regardless of the physical boundaries.

Richard Gipson, director of the TCU School of Music, introduced Jose Feghali to the Internet2 technology. Gipson had been working with the technology since its infancy when he served as the director for the University of Oklahoma School of Music.

“He has gone farther and quicker than I had expected it was possible to go,” Gipson said. “His level of expertise, problem-solving ability and his innate curiosity is mindboggling.”

While he is not practicing, performing or experimenting with technology, Jose Feghali likes delving into the world of physics, relativity, quantum mechanics, cosmology, astrology and listening to jazz from artists like trumpeters Louis Armstrong and Wynton Marsalis.

Jose Feghali said he wants to continue pursuing all of his passions and professions. Musically, he is currently working on his solo project, a CD of Schumann’s compositions, which is titled the “Everest Climbing Project.” He is going to play, produce, engineer, design and write the notes.

Technologically and academically, he is working on the exchange of master classes using technologies such as ConferenceXP and Internet2 between TCU and the Juilliard School and University of Southern California and adding advanced audio quality in the program for better output.