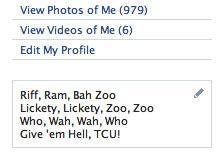 On the home page of its Web site, Facebook says it “helps you connect and share with the people in your life.”

Those people now not only include your old high school pals, international friends and past crushes, but also aunts, uncles, priests and even TCU professors. What was once seen as a network for young people has expanded beyond this generation.

Adults must be doing something productive on Facebook if they are not using it for its most popular abilities: scanning through party pictures, stealing people’s favorite quotes, poking enemies or looking up hot girls. But according to some of the university’s professors, Facebook actually has more importance and potential than that.

Richard Allen, a radio-TV-film department chair and professor, said he primarily uses Facebook to keep in touch with former students and to organize alumni activities.

“I wouldn’t want a student to think that if they write that their favorite movies are what we watch in class or their favorite books are intellectual that I’m going to think better of them or something,” Allen said.

Allen said Facebook relationships between teachers and students can be too personal at times.

“I feel like Facebook Chat is like if I was working and a student popped out of my desk and went ‘Hey, what’s goin’ on?'” Allen said.

Doug Ingram, an astronomy and physics professor, agreed that it does not affect his teacher-student relationships and he would rather get to know a student in person. However, Facebook is helpful because it allows students to see his interests so they can approach him more easily, he said.

“Students don’t want to come to a professor’s office and say ‘So, tell me about yourself,'” Ingram said. “This way they can find things out about me without being embarrassed.”

Steve Levering, a journalism professor, said he uses Facebook in the same regard as he uses Frog Camp and Connections: to get to know people better.

“One of the things a lot of professors struggle with is the idea that we’re human beings as well – we’re not just robots that come and teach class,” Levering said.

Students can see his interests and know a little more about him so that they can be more comfortable in his class, Levering said.

Although Levering and Ingram both said they want students to find out more about them, it is not necessarily vice versa.

“Rooting around through student Facebook pages seems to me to be prying,” Ingram said.

“It’s kind of weird knowing professors can look at pictures of parties and stuff,” Powers said.

Jordan Taylor, a junior history and German double major, said he thinks adults in general, not just professors on Facebook are “awkward.”

“My mom friended me on Facebook,” Taylor said. “It’s still in my little request box.”

While many students have grown accustomed to professors on Facebook, perhaps some never will. But go ahead, friend your professors. They are people too.