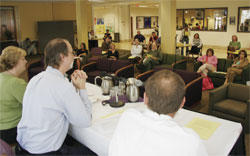 A town hall meeting intended to generate student feedback about a reading program for incoming freshmen lacked the response and attendance coordinators expected.Vision In Action members hosted a meeting pertaining to a first-year student common reading plan, which calls for students to read and discuss texts with faculty, and fewer than 20 people attended.

The common reading, funded with $26,300 in VIA grants, is supposed to get students to think academically and get to know professors before classes, said Andrew Fort , a religion professor who led the discussion.

Earlier this week, Leo Munson, vice chancellor for academic support, said the audience feedback from the town hall meeting would determine whether the common reading program’s continuation would be warranted, but now he is not sure how the program’s coordinator’s will proceed.

Munson said the poor attendance at the meeting will not stop the program from going into effect because it was simply supposed to help generate ideas for how the program will run.

“The meeting was an assessment which should determine the direction of the program, not the fate,” Munson said.

Faculty coordinators at the meeting said they expected more feedback from the student body and that current students will benefit from the program as well as incoming students.

“It would have been wonderful to have more students,” said Catherine Wehlburg, the coordinator of the meeting.

Wehlburg said the meeting would have been meaningful to students because they will have to interact with incoming freshmen affected by the common reading in classes down the road.

During a drought of silence at the meeting, one of the three audience members in attendance asked why freshmen would attend an academic event before school started.

Carrie Zimmerman, program coordinator for Student Development Services, said freshmen will be required to attend a discussion session with a faculty member the Friday before school starts, which will be separate from the two-day orientation session.

The $26,300 awarded to the program will cover its expenses for one fiscal year, said Ann Sewell, associate provost of academic planning and budgeting. Each professor involved will receive a $100 stipend, and money may also be spent on booklets to send to incoming freshmen regarding the common reading.

Based on the assessment of the common reading this fall, Sewell said, the program may require more money if it is to be successful.

Fort said he views the common reading as a way for freshmen to get off on the right foot with faculty.

“Students’ immediate response after their first year of college is they are terrified of professors,” Zimmerman said. “The idea of college classrooms frightens incoming freshmen.