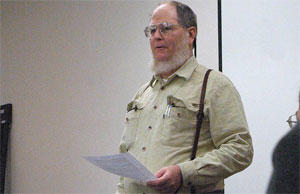 Tony Burgess learned that the smallest things could make the biggest difference in the ecosystem during his 19-year experience with the Biosphere 2 project.Burgess, a professor of professional practice with the TCU Institute of Environmental Studies, spoke about the Biosphere 2 project, which he said was an attempt to see if it was possible for man to create a self-sustaining community of organisms that the physical environment would sustain.

“The microbes ran everything,” Burgess said at a luncheon Monday hosted by Chi Delta Mu, a student organization for religion majors and minors.

Microbes are small organisms, such as bacteria or fungi, that are impossible to see with an unaided eye, Burgess said.

The biosphere was an attempt to re-create Earth, he said.

“(Biosphere 2) was a learning tool, which it was hoped could one day lead to the creation of a biosphere for use on Mars,” Burgess said.

However, the project was a failure, Burgess said, due to lack of communication, lack of funding and the sheer complexity of running an ecosystem.

“Although the Biosphere 2 project was intended to create a new Eden, the whole project turned into the Tower of Babel,” Burgess said.

He said Eden represented a complicated system that would nurture the survival and sustainable evolution of humans, and that the Tower of Babel represented communication problems between the scientists working on the project.

Burgess said that although people were not meant to control the environment, they could still learn how to consciously manage it.

“We didn’t evolve to be as gods – we don’t have what it takes – but that doesn’t mean we cannot be good players,” Burgess said.

Chi Delta Mu President Ben Graber, a senior religion major, said the conclusions Burgess drew from the project about man being unable to play god were predictable, based on his Protestant background, but the emphasis Burgess placed on the overwhelming complexity of natural systems stood out to him.

“One of the functions of religion is to constitute a set of lenses through which to view and interpret and symbolically represent this incredibly complex world system,” Graber said.

“I value what he had to say because failure is one of the best educational experiences there is,” Bertran said.