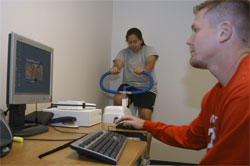 About 63 percent of Texas adults are overweight, according to the Centers for Disease Control and Prevention Web site, but the University Recreation Center wants to make sure that rate is lower on campus.Trey Morrison, assistant director for Campus Recreation fitness and wellness, says thatwith the new TCU Student Fitness Program, Campus Recreation looks to educate and train students to become healthier.

“We are trying to change lifestyles of a whole generation,” Morrison said. “We hope to eliminate some obesity.”

At a cost of $35, the 10-week program consists of nutritional and physical assessments, training and workout plans prepared by undergraduate and graduate kinesiology and health students and professional trainers, he said.

Steve Kintigh, director of Campus Recreation, said the cost of the program is hundreds of dollars less than area gyms for the students, who can pay for the program upfront or through send-home.

The first service the program gives is a nutrition consultation. The student receives diet and food recommendations based on body goals, said Shauna Cognata, a fitness and wellness coordinator for University Recreation Center and a senior kinesiology and health and fitness major.

Morrison said the nutrition consultation is the first step to a new body.

“If you’re not watching what you’re doing from a nutritional standpoint, you’re limiting yourself,” he said.

To determine where a student is physically, a trainer will complete assessments of cardiovascular fitness, bicep strength, flexibility and blood pressure, using the HealthWizard computer program, Morrison said.

The assessment tools, such as the stationary bicycle and scale, are hooked up to a computer and the program tracks and records the person’s rate and weight. The system then shows, via bar graph, the person’s level compared to a standard, based on gender and age, Morrison said.

Along with recording physical levels, the second step of the program includes a questionnaire to determine preferred physical activities of the student, he said.

With the data collected in Step 2 of the program, a personal trainer tailors a workout plan for the student to follow for 10 weeks in the third phase, Morrison said.

He said during this session, the trainer provides proper weight-lifting techniques.

Kintigh said this session is necessary because many people are unaware of specific kinds of exercise effects on the body. For instance, many females believe weight-lifting will make them bigger, he said.

After students learn about proper exercises in the third session, they are by themselves for the following 10 weeks, either choosing to execute the nutrition and exercise recommendations or not, Cognata said. Although there are no personal training sessions during these weeks, Cognata said she encourages her clients to contact her with questions and updates.

The final step of the program is a physical reassessment to see if goals were reached, Morrison said.

After completion of the program, Campus Recreation hopes the students will continue the healthy lifestyles learned during the 10 weeks, he said.

Alex Federer, a freshman business major, said she plans to continue the things she learned from the program.

“I just wanted to learn how to have a healthy lifestyle instead of chasing after every trend,” she said.

Campus Recreation did a similar program for faculty last semester and decided the program could be done on a larger scale, he said.

About 50 students are enrolled, Morrison said, but he believes there will be more.

While some students expressed no interest, others were impressed with low cost and the multiple services offered.

“I would do the nutrition assessments and the Micro Fit assessment, so that way you have a benchmark and find out what you’re doing wrong and how you can improve,” said Drew McCaebe, a sophomore finance and accounting major.