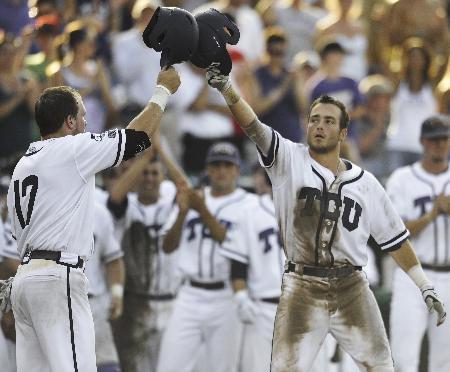 Matt Purke broke TCU’s all-time single-season wins record, notching his 16th win against UCLA as the Frogs lived to play at least one more game after a 6-2 victory over the Bruins.

Frogs’ All-American catcher Bryan Holaday added his 15th home run of the season for TCU’s sixth run of the game.

Purke (16-0) lasted 6 1/3 innings and gave up two runs on three hits, but it was more than enough to beat UCLA starting pitcher Rob Rasmussen (11-3), who lasted 4 1/3 innings; he allowed six hits and three runs.

Tyler Lockwood recorded his eighth save of the season in relief for Purke–he pitched the final 2 2/3 innings for TCU, allowing no runs and one hit.

TCU and UCLA will square off tomorrow in a do-or-die elimination game for both teams; the winner will advance out of Bracket 1 to the CWS Final.

The time of the final Bracket 1 game (either 1 p.m. or 6 p.m. on EPSN2) will be determined by the Clemson-South Carolina outcome later in the evening.

TCU will play at 1 p.m. if South Carolina escapes elimination tonight, while a Clemson win would guarantee a 6 p.m. start for TCU-UCLA tomorrow.

Rasmussen walked TCU third baseman Jantzen Witte to load the bases up in the first inning. Featherston battled a 3-2 count, and his eight- pitch-patience paid off; Rasmussen walked his second batter in a row to bring in a run.

Designated hitter Josh Elander looped a ball to center, but UCLA center fielder Beau Amaral, former MLB player Rich Amaral’s son, laid himself out to make a diving catch to save at least one run from scoring.

“(I was) a little nervous the first three or four innings because I felt like we Rasmussen on the ropes and didn’t cash in enough,” said TCU head baseball coach Jim Schlossnagle. “The play in center field in the first inning, I don’t know where in the world (Amaral) was playing.but that’s what a great center fielder does; he plays shallow and dares you to hit it over his head.”

Pena hit a RBI single to center to add another run for TCU in the second inning.

Added Gallego: “Yeah, the wind was blowing pretty good. But I mean TCU had to deal with the same wind as we did. And we know we should have handled it better.

On a full-count pitch in the bottom of the fourth inning, Pena zapped a laser shot into the left field stands for his 11th home run of the season, putting TCU up 3-0.

Bruins’ right fielder Chris Giovinazzo decided to get creative in the to of the fifth inning, bunting to reach base with no runners on and one out. It was UCLA’s first hit of the game.

Purke hit catcher Steve Rodriguez to put runners on first and second. It was Purke’s first sign of nerves in the game. On Purke’s 81st pitch Gallego hit a fly ball to right, ending UCLA’s scoring threat in the fifth inning.

UCLA right-hander Garret Claypool replaced Rasmussen. Claypool walked Featherston out of the game, putting runners on first and second, but he pitched out of the jam, coaxing a fly ball from Elander and striking out center fielder Aaron Schultz.

With two UCLA runners on and one out, Purke was done after 6 1/3 innings and 107 pitches. Lockwood, who threw 73 pitches in TCU’s 11-7 victory over Florida State on Wednesday, replaced the Freshman Pitcher of the Year.

Lockwood loaded the bases up after walking Rodriguez. Gallego his a grounder to Witte, but Witte couldn’t get to third base in time on a close play at the bag. It would be an RBI for Rodriguez, bringing the score to 3-2.

Lockwood, on the brink of blowing Purke’s lead and TCU’s CWS run, struck out Amaral to end the inning.

Curry hit a single in the bottom of the seventh inning. On a 1-1 pitch, Featherston knocked a 2 RBI homer to left field for his eighth of the season.

“(Featherston) is a guy that grinds out at bats, he doesn’t have the greatest stroke but he’s a very, very competitive player,” Schlossnagle said. “He just does a good job of trying to win pitches and he always seems to come up with a big hit when we need them.”

Holaday sent another ball into the stands in the eighth inning for TCU’s sixth run. Lockwood would finish the game, receiving his eighth save.

TCU is 3-0 in elimination games during the NCAA postseason.