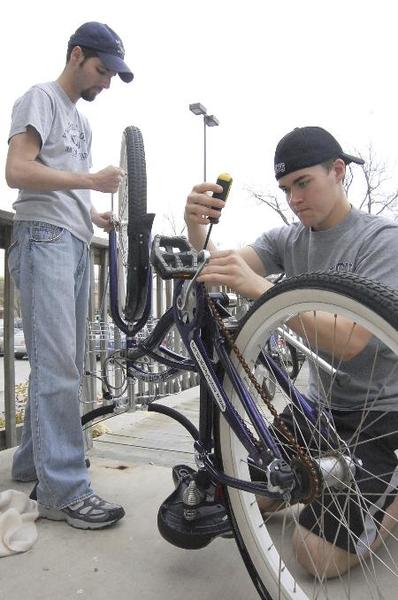 That used to be the undertaking of the Purple Bike Program’s only student volunteer, Quinn Garcia. With the accumulation of 35 more volunteers this semester, Garcia, a Brite Divinity student and maintenance coordinator of the program, said he is happy to have a few more helping hands.

Keith Whitworth, a sociology professor and coordinator of the Purple Bike Program, said the rush of volunteers came after he sent an e-mail to students in his classes and after posting a publication on TCU Announce asking for help.

Alongside an increase in volunteers came an increase in donations. With money donated from this semester and last, Whitworth said he will be purchasing 12 to 15 more bikes within the next two weeks and wants to have 250 bikes in the program one year from now.

Garcia said that last semester he had to handle all the maintenance for the bikes, from broken chains to flat tires, and said he hopes that with more volunteers the program can become more organized, accessible and prominent on campus.

“The advantage of having more volunteers is the ability to manage time,” Garcia said. “If we have 10 or 15 bikes that need maintenance there’s no way one person can do them all in one week or even in a month. Having four or five other people really spreads that ability out.”

Whitworth said volunteers have not only been assigned to helping with maintenance but also to handling logistics, advertising and fundraising.

Heather Santi, a junior religion major and advertising/public relations coordinator of the program, said the program is still organizing tasks and ideas but is trying to focus on spreading the word to the campus community as well as the Fort Worth community.

Tina Le, a physics graduate student and fundraising coordinator for the program, said her group of volunteers has several ideas brewing, including a fundraising competition among dorms, an environmental awareness event and a purple bike relay.

They are also trying to create a more manageable way to donate to the program, she said.

“There are people out there who want
to give money, but we don’t have an easy system set up for them to do it,” Le said.

Todd Klepacki, a freshman sociology major and logistics coordinator for the program, said he is working on making the bike check-out system more accessible as well.

Klepacki said he first started volunteering for the program as something he could get recognition for, but now realizes it is a way he can practice sustainability.

“The program is there to make it easier for people
to follow through with being more environmentally friendly,” Klepacki said. “We have lots of people nowadays that have so many ideas for being sustainable. Now you can do something as opposed to just talking about it.”

Whitworth said the program is focused on reducing carbon emissions around campus as well as encouraging students to ride a bicycle to and around campus rather than driving a car.

“We are not a bike culture in Texas, nor really a pedestrian culture,” Whitworth said. “We are more in tune with gas-guzzling SUVs than thinking about biking or walking.”

Whitworth said he hopes the program will help change this attitude for students.

“The VIA grants provided seed money for the project,” Sewell said. “Dr. Whitworth and the volunteers provided the time, effort and enthusiasm to allow the project to grow and be successful.”

Garcia said that while the program is expanding, he hopes it is not going to stop here.

“We really hope that in the future we can have an even stronger volunteer base so that way anything from maintenance to logistics to fundraising – you name it, we have student volunteers working on it,” Garcia said. “It wouldn’t just be a project of a professor but a project of the TCU students.”