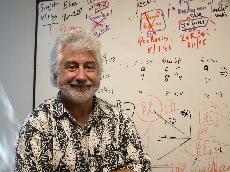 In 2006, mortgage companies and banks starting taking bigger risks by increasing the limits homeowners could borrow and by easing restrictions on proving a buyer’s financial situation. In the second half of 2006, housing prices started to fall dramatically.

Then in the second half of 2007, the number of homeowners who defaulted on their loans rose. Homeowners who couldn’t sell or refinance their homes had to default on their debt. The mortgage crisis spread to the rest of Wall Street. The government has been forced to intervene in key financial institutions such as insurance corporation American International Group as well as lenders Fannie Mae and Freddie Mac, two companies that combined own half of the U.S. mortgage debt that were forced to seek help from the government. Government officials are currently discussing a proposed $700 billion bailout to rescue the financial system.

Finance professor Peter Locke gives his perspective on the financial crisis. Locke is an expert in financial markets and served in the U.S. Commodity Futures Trading Commission from 1989 to 1999. He has a B.A. in mathematics and economics from University of Oregon and a Ph.D. in economics from Texas A & M.

Q: What would you say the government did for AIG and Fannie Mae and Freddie Mac?

A: It was kind of a leverage buyout. They basically were borrowing money, your and my money, to take ownership positions. They are borrowing from us to buy a company.

Q: How do you distinguish between a “bailout” and a leverage buyout?

A: Bailout sounds like you did something wrong, and we’re just going to give you some more money. Actually, I heard on the radio this morning that they’re coming up with some reductions in executive salaries so they’re not really going to bail them out. I didn’t think they could get away or would want to just throw money at them.

Q: So “bailout” has connotations of bailing them out with any repercussions?

A: That’s what I don’t like about the word. We go in there, change management, reduce some of the salaries and put some controls in, so I think that’s not a “bailout.”

Q: What happened to Fannie Mae and Freddie Mac?

A: You can look back at articles in the Wall Street Journal on Fannie Mae and Freddie Mac at the earlier part of the decade, and every week it had articles about “Who’s watching Fannie and Freddie?” First they managed their earnings. They had to restate their earnings because they were trying to manage them and actually inflated the price at one point so they could get bonuses for their members, and then as a sort of punishment, they agreed to really focus on lower-income housing.

Q: So this is where the trouble from sub-prime mortgages comes in?

A: That’s kind of where it really started to take off. If you drew a straight line from 1995 to about right now for housing prices, it would look pretty good up to 2002, and now we’re on the line now. In between there’s this huge jump, so prices went up 20 or 30 percent per year for a couple of years, and now they’ve come back down to Earth. They (Fannie and Freddie) fueled a lot of it. They own about half of the sub-prime debt indirectly. You’d have to say the writing was there. They are taking these huge risks, and no one’s really paying attention and Congress refused to pull the reins in on them.

Q: Do you think lenders are more hesitant to give out credit now?

A: That’s basically the concern that Ben Bernanke [Federal Reserve Chairman] and Henry Paulson [U.S. Treasury Secretary] have expressed, where there’s this frozen situation going on, and every loan is now suspect. We call this sometimes in finance a “contagion.” Somebody gets the flu, and you wonder who else has it. So you don’t want to shake hands with anybody because you might get it too. There’s just a lot of uncertainty. We don’t know who has good assets and who has bad assets.

Q: If every loan is kind of suspect, would that include student loans?

Q: You’re talking about trying to keep student loans out of the areas that are being targeted?

Q: Is that in the Congress plan?

A: I don’t think it’s in the current plan, not what they’re working on now. They have too much to do now. These guys are busy. They’re having to actually work for all that money we pay them.

Q: So in terms of students, do you have any advice for business students who are seniors and will be graduating soon into this kind of financial market?

A: There’s still going to be a need for intermediation. These are financial intermediaries, whether they are investment banks, banks or hedge funds or private equity, there’s still a lot of money that needs to get invested. So that intermediation where we take the money that people want to invest, and we try to get that to the people who have business ideas. That’s still going to go on.

Q: So the job market for business graduates should be OK?

A: I wouldn’t go that far. I think there’s going to be a little shakeout. There’re some people who are going to be looking for jobs. As long as there is work to be done, then there will be a need for people. Plus, there’s always the added benefit of being a rookie, a senior coming out on the job market, so you’re cheaper.

Q: With the market and its fluctuations, do you think this might affect how TCU invests with its endowment?

A: I’m sure there’s more money in the endowment now then there was in 1995 or 1996 and growth over that period has been fine. Depending on how far back you look, you can look and say that it’s been negative for the last five years and maybe it has but what about 12 years? It depends on your frame of reference. It’s dicey to look and say “the last year has been terrible and let’s get out, let’s put it all in money market funds.” No that’s not necessarily the right thing to do.

Q: In terms of the housing market, do you think it might affect the construction of new buildings on campus?

A: Well it should be cheaper. Material demand would go down. You’d think, but now we have to rebuild Galveston. So there’s some construction going on down there. I can imagine plywood prices are spiking up. That happens when you have rebuilding going on. If TCU has the bucks to spend on construction products you’d think that the supply of those services should be easy to get. So therefore bids should be a little lower than you might have had during the housing boom where everybody’s building somewhere.

Q: What do you think that we are seeing right now?

A: We get to this fall in the asset values just like in 2000 where we had a fall in stock prices, and there was some shakeout in the financial sector, not much, not like we’re having now. You’re having the same sort of effect in this sense that there was this huge loss of wealth, nominal wealth, where we had driven up housing prices, and now we’ve seen them come back down to reality. That change in what we thought things were worth, because it’s really just a perception, that change has to trickle through. People have all kinds of bets on that, financial strategies on that wealth, and now that change has to filter through the economy.

Q: So when it gets filtered to the average student, let’s say, how much of an effect do you think it will have?

A: The fear isn’t that there’s anything hidden out there. We know pretty much what the change in the value of housing is. It’s pretty much down where it’s supposed to be. So that’s done. It’s probably not going to go much lower. We just look back and see how does this affect anybody and why should it and really it shouldn’t. If you have an idea to set up some company, to build something and export something, then you should be able to go to the bank – if it’s legitimate and it has a reasonable chance for success – and should be able to get some money. The rest of that stuff we have to clean up: all these people who were making $50,000 and buying a $600,000 house, that’s just silly. There’s some bad deals out there that have to be cleaned up.