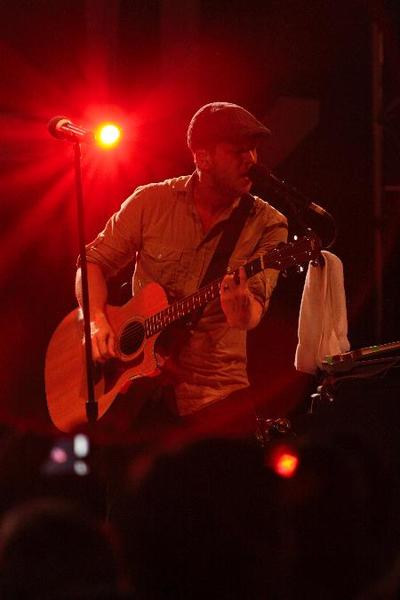 Kelsie Johnson, student body president, said she thought the concert could not have gone better than it did.

Around 2,000 community members switched their football tickets for concert tickets, Johnson said. The number of people at the concert was estimated to be about 3,500.

Marlon Figueroa, student body treasurer, said SGA held a meet-and-greet with OneRepublic while Hot Chelle Rae performed. The event staff lined up to take pictures with OneRepublic and had their t-shirts signed.

“The contributions and hard work of many departments across campus made this dream we had as SGA come true,” Figueroa said.

Kennedy Stewart, programming council chair, said OneRepublic did not allow interviews. She said the band asked for whole pieces of fruit, Fruit by the Foot and Orbit gum to be placed in their dressing rooms, which became evident when guitarist Drew Brown started throwing Fruit by the Foot out to the crowd during the show.

OneRepublic’s opener, Nashville band Hot Chelle Rae, surprised many students who had not heard their music before. Stewart said she wanted to look the band up when the concert finished.

Q: How long have you been a band for?

Ryan Follese: It started with Nash and I. Nash and I have been in a band for about five years. We went through musician after musician. Ian was introduced to the band about three and a half years ago. He (Jamie) followed suit and knew all the songs. After that, it was like when you know it is right, it is right.

Q: Where are you from?

Overstreet: I don’t care what anyone says, Nashville’s weather is way rainier and hotter than Texas, so we are happy to be here.

Q: What do you think about TCU’s campus?

Ryan Follese: I’m blown away by the campus. I’ve been to several college campuses, and this is by far the most beautiful college campus I’ve ever seen. We were looking out the balcony earlier, and it was just gorgeous.

Q: What was it like performing for the TCU campus compared to other campuses?

Keaggy: I have to say that this far in the game, this is definitely the best performance that we’ve had. We got off stage and I was like, “Dude, that was the bomb.” The crowd was like this endless sea of people and they were static and were stoked and the sound was awesome. It couldn’t have been better.

Ryan Follese: Performing on the TCU stage was nothing short of amazing. Being able to play with OneRepublic was incredible. Ryan T (OneRepublic frontman)has written so many songs that we just love. And this campus just brought it, so hard. I’m sure the football game was intense but this was probably just as intense for us. It was incredibly heartfelt; it was amazing.