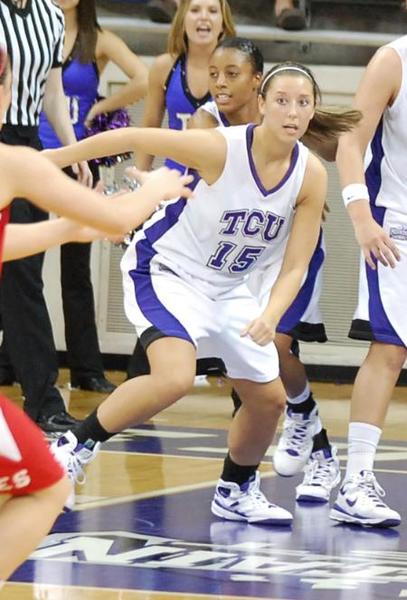 Sophomore forward Emily Carter, named to the All-Mountain West Conference Second Team on Monday, and the rest of the Lady Frogs will get rolling in the conference tournament Wednesday at 9 p.m. The team fought its way to a 20-9 record during the regular season including a 12-4 record in the MWC, good enough for third place in the conference. Carter was tied with fellow teammate TK LaFleur for sixth in the conference scoring at 13.9 points per game. She also finished first in the conference in 3-point field goal percentage at a 42 percent clip. She was fourth in steals as well. On Monday, Carter reflected on the Lady Frogs’ regular season success and offered some thoughts on the important games that lie ahead.

Q: Your season ended on a high note with a win against Utah. What went right for the Lady Frogs on Saturday?

Q: If your team had managed to beat San Diego State on Feb. 28, the game against Utah could have been for a share of first place in the conference. Is the team disappointed about not earning a share of the conference title?

A: It is upsetting, but we have a good seed in the conference and we have a chance to maybe play San Diego (State) again. If we get past the first round we’ll play them in the semis. We know that we’ll have another shot at them so that’s kind of our motivation.

Q: Overall, how did the regular season go for the Lady Frogs?

A: I think it went well. I think we’re still improving. You kind of want to be peaking at this time of the year and I think we are. We’re really improving and working well as a team.

Q: How do you think you’ve done individually so far this season?

A: I would say pretty good. I feel like I’ve gotten more confident in myself, which is something I really wanted to do. That’s the main thing that I’ve tried to do, stay more focused on my shot and then help get my teammates get open.

Q: Aside from the Utah game, are there any other games that stick out in your mind as being really memorable?

A: I would say Maryland and Cal. Those were both really big games for us. That kind of made our confidence go up, just that we knew we could beat good teams like that. Hopefully we’ll have some more good games coming up this week.

Q: What do you think this team is capable of as it heads to the conference championships in Las Vegas?

A: I think we’re capable of winning a championship, it’s just putting all of the pieces together offensively, defensively and just playing well as a team. I think we can do that.

Q: What’s the one thing the team has improved the most as the season has progressed?

A: I would say our defenses have improved a lot because we run a lot of different defenses and just working well as a team and playing together. We’re playing together more now than we did in the beginning and it’s showing.

Q: What is one key area the team needs to focus on in order to take it’s game to the next level as the championships begin?

A: Our rebounding. That’s been something we’ve kind of been struggling with the entire year. Also, the teams we’re going to play are going to pressure us a lot, so we just need to handle pressure better.

Q: What is the team’s ultimate goal?

A: A conference championship. I guess the NCAA Tournament is always a goal of ours, it’s up on our board. We start this week with the conference tournament and then we’ll move from there.

TCU vs. winner of BYU/UNLV
Who: Circle Theatre and Theatre TCU When: 9 p.m. Wednesday Where: Thomas & Mack
Center, Las Vegas TV: The Mtn.