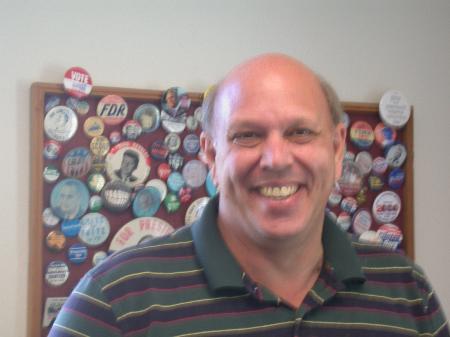 Professor of communication studies Paul King is an expert in debate and communication ethics. He completed his undergraduate studies at Hardin Simmons University and earned a master’s degree and a doctorate at TCU and University of North Texas, respectively.

Q: What was the kind of debating style the candidates exhibited tonight?

A: I think a better question is what was the kind of public speaking style because there was little direct interaction, there was no cross-examination, there wasn’t a lot of follow-up. As a matter of fact, I don’t think the moderator even asked follow-up questions. There was an opportunity to do a brief rebuttal, but the moderator didn’t intervene, at least not often. And this is often what happens in presidential debates: That is essentially being placed in the same room, being asked a question and both have the opportunity to respond.

The main thing I was looking for was responsiveness, which is when a question is asked, do you answer that particular question or do you answer another question? One of the reasons I was looking for this is not only because it’s very important, but because there has been this notion that perhaps Palin is going to have memorized responses, that she’s going to be on talking points, that she’s repeating speech points rather than answering questions.

She did seem to be able to respond to most of the topic areas addressed, and Biden also but some of his responses were only partial responses, not directly responsive. A couple I could give you that might provide a little insight. The first one was about McCain and deregulation and the fact that McCain has voted consistently for deregulation. That was a point that Biden responded to. Palin really didn’t address the issue but instead went to a discussion over the fact that Barack Obama will raise taxes which is being disputed by the Obama campaign as to whether that’s true or not. She talked about tax policy. Biden’s response was that Gov. Palin didn’t answer the question about deregulation. And then it went back to Palin for a response and she said “well I may not be answering the question that you want and the moderator wants but…” and then she started talking about the fact that she lowered taxes as mayor of Wasilla.

Q: In terms of Joe Biden, did you see any lapses in responsiveness like in the several points you made with Palin?

A: I didn’t see a complete disconnect in terms of argument extension like I did in those two cases. I might also point out that when it got toward the end of the debate in terms of Iraq policy, there were a couple occasions when Palin was extremely responsive to the question and had what I thought were strong responses. I’m not trying to suggest that there was a huge difference between the candidates. In fact to be quite honest with you, I was kind of a little bit surprised that there was not, given what some people have been saying about “Well, she’s not as experienced, she doesn’t have the Senate background to go back to and so on.”

The other thing I was looking for specifically was language, especially points that were repeated from the two. For Biden, the point that was repeated a billion times was “middle class.” You can get an idea of what the strategy of the campaign is by looking at the words that they continue repeating. For Palin, the word that was repeated a hundred times was “maverick.” If I had a dollar for every time she said “maverick,” I could have a really nice dinner. Those were the words that the campaigns tried to drive home.

Q: Do you think that was a conscious decision on the part of Biden and Palin?

A: It was a very conscious decision on both of their parts.

Q: Do you think it was a conscious effort from Palin to separate John McCain’s policies from George Bush’s policies in voters’ minds?

A: Yes, and I think Biden’s use of the words “middle class” was a conscious effort to appeal to the average voter out there that is feeling tough times. Just as an aside, there was a very folksy delivery style by Palin, clipping a lot of the words. Her terminology was very folksy, Joe Six-Pack, hockey moms and soccer moms. “Sitting around the table” in that clipped style, while Biden had a general American delivery. There was a difference in style just in terms of some of those things.

Q: In terms of the individual candidates, what do you think Palin’s weaknesses were?

A: In terms of public speaking or debate, nonresponsiveness. She was slightly less responsive especially on a couple of questions. In at least one case, she opened up a new topic in the middle of a discussion on bankruptcy.

A: For Biden, there were a couple times when he started talking about “Joe Biden” and the way the votes went down in the Senate which was kind of an inside politics thing. That probably doesn’t help him as much with a lot of folks who aren’t interested with how a vote went down in 1988.

Political science professor James Riddlesperger is an expert in American and Texas politics. He earned bachelor’s and master’s degrees from North Texas State University (now University of North Texas) and a doctorate from the University of Missouri-Columbia.

Q: Who do you think won the debate and why?

A: I think you have to score the debates in a relative sense. Palin exceeded her expectations and because of that, a lot people will think of her as having won the debate. If you were scoring on debate points, it would be more difficult to score. It was not a debate that ended up changing the complexion of the presidential race.

Q: There have been many critics of Palin saying that she stumbled through answers on the bailout and Russia. On the other hand, many critics have accused Biden of making too many gaffes and talking for too long and getting off-topic. Do you think this overturns many critics’ expectations with their performance tonight?

A: There were people who thought Biden would have a hard time limiting his comments. Biden’s been in politics an awfully long time, and he was going to be able to conform his answers to the rules of the game. And of course Palin has been virtually cloistered for the last week, practicing answers and how to respond to questions under the rules of this debate. So both of these candidates were well-prompted, they were well-rehearsed, and what you saw tonight was as soon a question was answered, they went into a spin, a prepared talking point that was premeditated and planned before the debate, and I don’t think either one was forced to go off their cue card. So for that reason the debate went pretty much as both of them had hoped it would go.

Q: Do you think Palin showed more control in the way of knowing her stuff, knowing the facts and specific policies?

A: When you prepare for something like this, you anticipate what the questions are and then you have the prepared responses. So there wasn’t a single quip made by either one that hadn’t been prepared before the debate began. They were calculated to send a message. So when Joe Biden went into the long list of ways John McCain was not a maverick, that was a speech prepared ahead of time. When Sarah Palin went into her routine where she was giving a shout-out to the folks and her brother’s class, that was a prepared speech with an intent to be folksy and endearing.

Q: Whereas Palin said she’s an outsider and the critics of Biden say he might be offering more of the same, do you think Biden established his experience would allow him to make the changes needed?

Q: Do you think Palin established well enough that McCain’s policies will be a change from the Bush administration’s policies?

A: She tried to. How many times did she use the word “maverick?” There were two or three times where she tried to differentiate at least slightly from Bush.

Q: You were saying with all the prepared speeches and all the preparation that went into this, everything went as planned. Do you think that diminishes the importance of these debates?

A: I think it does. I think what has happened over time is that campaign managers have successfully redefined debates so they’re no longer debates. In fact, I refuse to call them debates. I refer to them as joint public appearances. Because what they’re both doing is responding to questions that a journalist asks, but they’re really not making point-counterpoint in anything like what we might call a debate. The consequence of that is that the handlers in both parties have mastered the technique of responding to those questions and doing so in the time frame you have with the best campaign message you can get in an answer to every question.