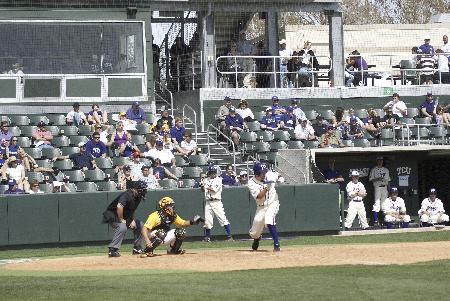 Senior infielder Corey Steglich is playing in his last season with the Horned Frogs. The last three seasons, he has seen his team make it to the top of the Mountain West Conference, and he says he’s excited to repeat the success at the MWC Tournament in May at home. Steglich, a Fort Worth native, has started in 33 of 36 games this season, racking up a batting average of .328 and a fielding average of .974. After Wednesday’s 10-7 victory over Texas A&M-Corpus Christi, Steglich reflected on the season so far.

Q: How did it feel to sweep Corpus Christi?

A: It felt good. … They’re a pretty good team. It felt good to get two wins out of the way and we’re all feeling good right now.

A: Oh, yes. They got us two out of three on our field and we’re not going allow that. So when we go to San Diego, we don’t even care who’s on the mound. Even if Stephen Strasburg is on the mound we’re ready to play.

Q: What have you learned from the last series?

A: We know the pitchers a little bit more now and really we’re just playing the wounded dog right now. They came and they beat us and they feel like they have an advantage and that’s fine for us because we’re going to be ready to play.

A: It’s tough. He’s a once-in-a-lifetime pitcher. You never have that kind of velocity with that kind of command.

Q: Was it weird to have a series canceled because of snow last weekend?

A: That was very odd. I’ve had games canceled before but never like that. Usually we find a way to play but it was a strange thing. It kind of threw us off but we got a couple good days of practice.

Q: How do you think the season has gone for you, personally?

A: Personally, I’m not doing as well as I expect myself to do but I still don’t think I’ve gotten hot yet. I’m hanging in there at the plate and I’m hitting well but I know I can do a lot more.

Q: Are you looking forward to the conference tournament coming up?

A: It’s my senior year and we won all three. So there’s no reason that we don’t think we can win, and it’s on our home field, so everybody’s pretty excited about that.

Q: Are you looking forward to the upcoming seven-game home stand?

A: We’ve been on the road a lot. Most of us have missed a lot of school. And we’re just ready to get back – have all our fans at the park and we’re ready to get these conference series in.

A: It’s Damien Marley and it’s called “Welcome to Jamrock.” I’ve used other kinds of music before and I just kind of wanted something lighthearted this year and something fun the fans would like.