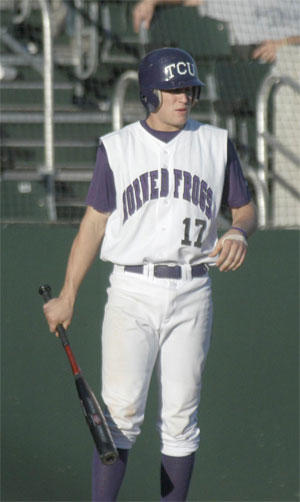 Junior infielder (and quarterback) Chad Huffman sits down with Sports Editor Travis Stewart for a few candid – if not surprising – answers.Whis is better, baseball or football?

Who’s your weirdest teammate on the baseball team?

Playing in baseball means you got a bunch of weird guys … including myself.

One of the funny ones is to tie a cup of water in their locker, so when they open it up, it splashes in their face. The best one in football though, is to get QDA stick sport – it’s real sticky – and you take their helmet and their mouthpiece and rub it all on there. Then they put their helmet on and it starts sticking and ripping their hair off.

Who’s the most athletic player you’ve ever played with or against?

The shortstop from Louisville is good, but I’ll go with James Loney. He’s a first round pick of the L.A. Dodgers. The guy is good at everything.

Probably more about baseball because I’ve had more success there than in football. When I got into a game last year, I got some of that recognition for a while after the game.

What class at TCU did you hate the most?

That falls into like three-fourths of my classes. I’d probably say financial accounting. The teacher’s name was Nichols. He didn’t like me and I didn’t like him. The tests weren’t multiple choice, everything was fill-in-the-blank.

Which guy on the baseball team gets the most girls?

Oh man, that’s a tough one to answer because I don’t want to hurt anyone’s game. I don’t want to get quoted saying in the paper, “this guy gets a lot of girls,” then no girls will go out with him anymore.

If you could go to one other school besides TCU, what would it be?

I was very close to committing to LSU coming out of high school, just to play baseball. Either that or Arizona State or Southern California.

Are you a superstitious player, and what’s your weirdest superstition?

I kind of am, and probably touching myself. I grab my cup and pick my wedgie every at bat. Every pitch I do it. People always ask me what the hell I’m doing.

This year in the Cape (tournament), this guy hits a line drive that bounces right off the bag, hits the umpire in the chest, then bounces right back to the first baseman and the guy’s out. That’s the worst way to get out.