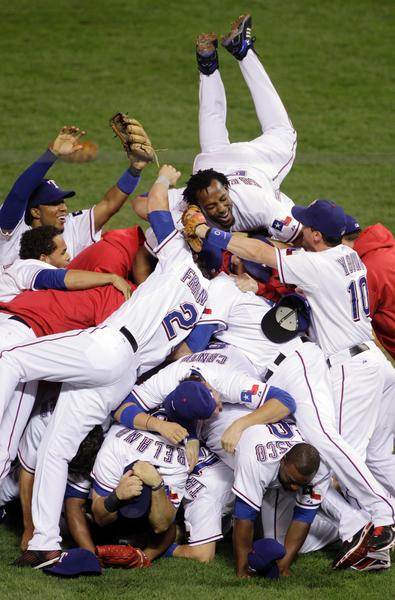 The World Series-bound Texas Rangers and the No. 4 Horned Frog football team have plenty in common, and as the World Series nears, football head coach Gary Patterson has both teams on his mind.

Patterson said he was really excited about the Rangers’ success. Friday night, when the Rangers won the American League Championship Series, Patterson said he put down his game notes for the Air Force game in order to concentrate on the action on the television.

“It was just exciting to be able to watch and be a part of it,” Patterson said. “Knowing we’re up here in North Texas and that’s the first time for them to do that.”

Looking forward, Patterson said he is upset that he will not be able to watch the World Series and will be instead focusing on upcoming football games.

“I’d like to be sitting…watching a baseball game eating a hot dog, and I’m going to be eating a cold sandwich watching some [conference team],” Patterson said.

The recent success of the Rangers has not pulled fans away from Horned Frog football games, however. Patterson said TCU athletics has a purple following, and the stands have been full.

Saturday was a night of records not only for attendance but also for individual Horned Frog players. Experienced players recorded career-best yardage, while younger players made their mark with key plays.

Sophomores Ed Wesley and Matthew Tucker both shined on the Frogs’ offense. Wesley, who scored two touchdowns during the game, brought the Frogs their first points in the second half with an eight-yard rushing touchdown.

Wesley rushed 13 yards for his second touchdown of the game, bringing his total yardage for the game to 209 yards, a personal career high. Wesley’s rushing yard record was the most scored by a Horned Frog since former player Joseph Turner in 2007. Wesley’s total also marked the fourth time this season he rushed for more than 100 yards.

Wesley was not the only sophomore making key plays against Air Force Saturday night. Tucker, a tailback, rushed for six yards to score a touchdown for the Frogs at the end of the third quarter.

Senior quarterback Andy Dalton said the younger players’ accomplishments were a result of the practice and time they had put into the game.

“The way [Wesley] has been playing all year, you can just see he is playing with great passion,” Dalton said. “He’s earned where he’s at today because of the hard work that he’s put in.”

As for the upperclassmen, Dalton also made key plays for the Frogs with a career-long 47-yard carry in the third quarter.

Dalton said he had never seen as much grass as Air Force allowed when he made that carry, and he said he just had to make sure to run out of bounds quickly.

His run doubled his previous record, a 24-yard carry, which was against Boise State in 2008.

The team is preparing for its upcoming game against UNLV, and the Rangers are preparing for their first World Series appearance. As each game progresses, potentially more individual and team records will be recorded between two of the top-performing sports teams in North Texas.