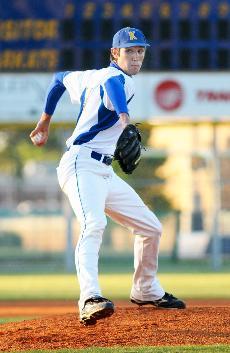 After a weekend of uncertainty and misinformation, it took less than 30 seconds for the Horned Frogs to officially welcome pitcher Matt Purke to the fold.

“He called and said, ‘Coach, do you have a roster spot for me?’ and I said, ‘We’ll find one,'” head coach Jim Schlossnagle said.

Purke, a left-handed pitcher from Klein High School outside of Houston, was drafted 14th overall in the first round of this year’s Major League Baseball draft by the Texas Rangers. The Rangers had until 10:59 p.m. CST on August 17 to sign him to a contract, but the two sides were unable to reach a deal.

“We probably didn’t talk 30 seconds,” Schlossnagle said. “He was really, really emotional, because it was really hard for him and his family. It was as much stress as you can possibly imagine.”

According to an Aug. 18 story by MLB.com reporter T.R. Sullivan, the Rangers offered a $4 million signing bonus in the final minutes of negotiations, but Purke was looking for a bonus of at least $6 million.

Purke’s high school coach, Barry Smith, said the Purke family was up front and honest about their demands.

“I can understand the frustration on their part (with saying), ‘This is what we want up front, and if you’re interested, pick us. If not, let us go,” Smith said. “And of course that did not happen.”

By not signing a deal, Purke will join the TCU baseball team, where he committed last October.

Coach Schlossnagle was happy with the news, but said Purke hasn’t earned a spot in his rotation yet.

“When you add a player of (Purke’s) caliber, it’s got to help you, but he’s going to have to compete for time,” Schlossnagle said. “Our weekend rotation is back, and the best pitchers will pitch. He’ll pitch as much as he earns.”

Only three of TCU’s 11 pitchers were seniors for the 2009 season.

Purke has impressed scouts by hitting 90-93 mph on his fastball and dominates with his off-speed pitches, but his potential for growth is a large part of his appeal, Smith said. Purke is listed as 6-foot-3, 180 pounds in a Texas Rangers press release.

“The big thing for him is going to be adding muscle,” Smith said. “He’s very thin, and I think that’s what the scouts were so excited about. He has a frame you can put weight on.”

Schlossnagle said he agreed with Smith’s assessment. Smith added that he thought Purke would be able to not only pitch faster with added muscle, but also be able to pitch for longer.

The Horned Frogs have had an eye on Purke for years now, and Schlossnagle said the last time he saw him pitch in person was before Purke’s junior season at Klein. TCU was actively looking for left-handed pitchers, and Purke was a near perfect fit, Schlossnagle said.. He also showed equal interest in the university, the coach said.

“He called here and said, ‘I have some interest in TCU,’ because of what we’ve done with pitchers in recent years,” Schlossnagle said. “He recruited us as much as we recruited him.”

Pursuing Purke meant taking a risk from the start, but Coach Schlossnagle said Associate Head Coach Todd Whitting did a great job recruiting Purke and minimizing risk. The Horned Frogs were nervous about investing time and money in a prospect that might go pro.

“You want to recruit really good players (in college baseball), but you can’t recruit players that are too good,” Schlossnagle said. “If you recruit four or five players at that level and they sign, then you’re left with nobody.”

TCU signed Purke without Schlossnagle making a home visit, talking to Smith or Purke even using his entire visit.

“He came (to visit TCU) Saturday mid-day and left Sunday after breakfast, so he wasn’t even here the allotted 48 hours,” Schlossnagle said.

After the Rangers drafted Purke, it became a waiting game.

“As (the deadline) got closer, I thought our chances they were (about as) good as they possibly can be (for Purke to come to TCU),” Schlossnagle said. “Matt is very, very confident and has a very good sense of value and what he thinks his value is relative to the (MLB) draft in 2009.”

TCU Athletics media relations assistant Brandie Davidson said Purke would not be available for comment until during the 2010 season, citing a policy of not allowing freshman to engage in interviews with the media unless it is a post-game interview. Smith said Purke had a dual personality in his time at Klein.

“He is a Jekyll and Hyde type when he’s pitching and when he’s not,” Smith said. “When he wasn’t pitching, he was a regular guy goofing off with the guys during batting practice. But when it was his turn to pitch, he took on a whole different demeanor.”

“He was very withdrawn, and you could tell he was very focused just by his actions and his eyes . When it came time for him to do his business, he was gonna take care of it,” Smith said.

“If anybody could have gone out and handled the rigors of minor league baseball it was Matt,” Schlossnagle said.

“From my experiences with him, Matt is a smart kid who knows what he wants and isn’t afraid to work for it,” Daniels said. “Some people are happy being a small fish in a big pond but I don’t get that sense from him . dealing with success is a challenge in and of itself but he’s got good values and should be able to handle that too. The Rangers wish him luck.”

The Rangers declined to comment on the contract offer and negotiations.

The Rangers’ loss is the Horned Frogs’ gain.

“(Purke) loved the size of the school, the nurturing environment and from a baseball standpoint, he feels he can achieve all of his goals here,” Schlossnagle said.

As for the reported $4 million he left on the table, Purke will be eligible to be drafted again in 2011, after two years of collegiate baseball.