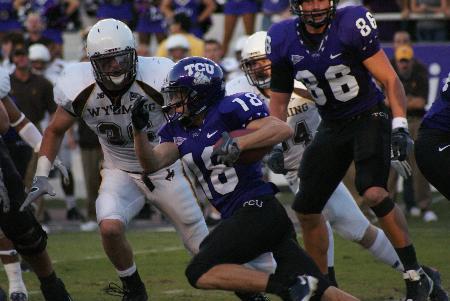 Editor’s note: Athletics Media Relations denied interviews with Frogs head coach Gary Patterson and running back Ryan Christian for this story, and Christian declined to be interviewed without the department’s permission.

Standing 5 feet 11 inches tall at a listed weight of 188 pounds, Ryan Christian doesn’t fit the mold of a college running back. But the junior has proven to be effective with his playmaking ability on the football field.

Aledo, a small town west of Fort Worth, is where Christian became a prominent high school athlete. He lettered in track, basketball and soccer. Football, however, gave him a chance to excel. He helped the Bearcats continue their winning tradition under head coach Tim Buchanan as the team made the playoffs in all four years of Christian’s high school career.

Buchanan, however, said he knew he had a special talent in Christian dating back to the tailback’s freshman year.

“He started for us as a freshman,” Buchanan said. “He could do it all, whether that meant running the football, receiving or blocking. He could even throw it if we asked him to.”

But running the football was where he made his mark, forging the path to where he is today.

“Right away, you could see he had great speed,” Buchanan said. “But that was genetic. His father was a really good player. There was no doubt in my mind that Ryan was going to make someone a great college football player.”

Christian hurt his opponents with long touchdown runs and big playoff game performances, but his mother, Jodi Christian, said she is more proud of the way her son carries himself away from the field.

“His character means more to me than anything else,” she said. “He plays with his heart and he encourages everybody else.”

In 2005, Christian did not see the field for the Frogs because the team decided to redshirt him. He didn’t see much of the field in his first season of active duty in 2006, either. But last year, he rushed for 321 yards and two touchdowns on 88 carries as the coaches officially moved him from wide receiver to running back. This season, Christian has seen his touches increase, as well as his time in the end zone. He has rushed for 366 yards and four touchdowns to go along with 201 yards receiving on 19 catches in 11 games.

Buchanan said Christian might cause coaches and players to underestimate his skill because he doesn’t have the size of a prototypical running back.

“Coaches would watch him on video and he ran like a big, strong running back,” he said. “But when he walked out on the field, they would ask, “Where’s Christian?” I’d point to him and they’d say, ‘No, coach. That’s a junior varsity player.'”

In the Frogs’ Nov. 6 loss to Utah, Christian accounted for 104 yards of offense, including a 1-yard touchdown run in the first quarter.

“We were watching our younger son, Todd, play on Thursday night (for Aledo),” Jodi Christian said. “So I got about 50 text messages when Ryan scored that touchdown.”

Running backs are expected to score touchdowns and extend drives, but an aspect of Christian’s game that may go unnoticed is his ability to protect the quarterback.

“One of the things I know TCU likes about him is his ability as a blocking back,” Buchanan said. “I think he’s definitely one of the best backs they have when it comes to blocking other guys.”