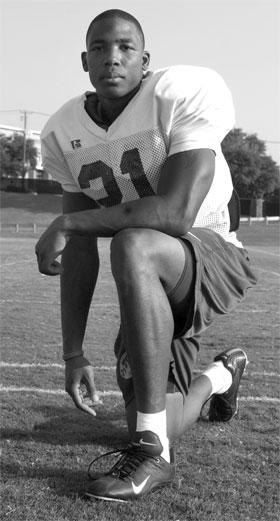 When receivers coach Jarrett Anderson was asked to describe typical “Coop,” he envisioned him “walking into practice with his chest out, with body oil on like he had just been sunbathing somewhere.”When the Frogs mention “Coop,” they are talking about Ervin Dickerson, a third-year wide receiver from Beeville.

Dickerson’s background may be a little different from what most of his teammates have experienced. He was adopted at a young age by a Hispanic family and raised in that environment.

“Coming from a Hispanic family has just pushed me harder,” Dickerson said. “Everybody used to say I would not make it, but my dad used to just push me to go harder.”

Growing up in a Hispanic household didn’t come without its share of funny moments, Dickerson said.

“At all of the big dinners the family would have, I would be the only black person at a table full of Hispanics,” Dickerson said. “I would always get racial jokes thrown at me, but it was all in fun.”

Many factors played a role in Dickerson’s decision to attend TCU.

“I knew Coach Wayne Coleman, a coach of mine in high school who is no longer here, would be coming to TCU,” Dickerson said. “I also have family members in the area, and I like the small environment of TCU. I can get around pretty good.”

Dickerson said his background isn’t the only thing that sets him apart from the rest of his teammates. He said what makes him “Coop” is his attitude and the way he does things.

“I’m a pretty honest guy.” Dickerson said. “I’m independent on the field and I just concentrate at being the best at everything I do.”

One player he may not be set too far apart from is junior Michael DePriest. DePriest is not only a fellow receiver but also a member of Dickerson’s fraternity, Phi Beta Sigma.

“It’s funny,” DePriest said. “When we’re at a party, we’ll be talking to some girls, and then a song will come on and Coop will just go off and do a strut for a little bit and then come back and join right back in the conversation. Donald Massey, one of the guys on the team, is always making fun of him in practice.”

Anderson said he hasn’t “had the pleasure of actually seeing any of Coop’s dance moves.”

“I’ve heard all about his dancing epidemics from the players,” Anderson said with a laugh. “I don’t really want to see him dance.”

A good laugh isn’t the only thing Dickerson adds to the team. He is a valued receiver for the Frogs and does a number of things on the field that may go unnoticed.

“Dickerson can play the X and Z receiving positions, which allows him to get on the field more than others sometimes,” Anderson said. “He doesn’t mind blocking a cornerback or the linebacker while out there either. He stays in the weight room, and that helps him get on the field, too.”

“Coop is a big body,” Bonner said. “It’s hard to get around him when he runs his routes. You have to toughen up a little bit.”

Dickerson’s favorite moment so far in college came early this season when the Frogs played the Oklahoma Sooners.

“Beating Oklahoma was definitely my favorite memory so far,” Dickerson said. “Beating Utah was a pretty good victory too, despite the disappointment the previous week against SMU.”

If students see a person walking around campus with his body oiled up doing random dance moves, chances are they have just seen “typical Coop.”