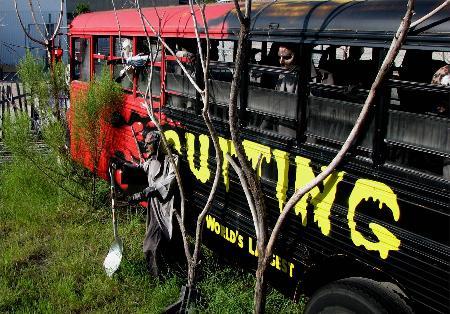 Outside of downtown Fort Worth lies a 100-year-old meat packing plant with a suspicious past.

Doors slam with no explanation. People hear things in certain parts of the building when no one is there.

A ghost has even been sighted in the clown room, dubbed the most haunted part of the warehouse by owner Todd James.

James, who purchased the building five years ago, said that it has conjured up haunts since he acquired it.

“When we found that old building … it had some things in it that were a little suspect. It looked like it had been up to no good for awhile,” James said.

The building, already haunted by its past, transformed into an entirely new home of terror when James and his group turned it into Cutting Edge Haunted House.

Upon entering the house, an eerie video instructs you to proceed through a haunted maze in the dark and find a door, Thompson said.

The group frantically searched for the non-existent door, and exited through a fire escape into the next haunting scene.

Thompson described that portion of the house as completely dark with water misting from the ceilings. Soaked and afraid, she continued her long trek through the haunted tour.

From ceiling to floor, the final room in the warehouse was packed with soapy bubbles, which Thompson described as a washing machine explosion.

“You are walking through and it’s getting all over you … and then you are outside, covered in bubbles. So that’s how it ended,” Thompson said.

Moving throughout three floors of elaborate and frightening scenes, Thompson said it was hard to tell the difference between what was real and what was fake.

“The people that worked it would blend into the wall really well,” Thompson said. “You didn’t know if (the person in front of you) was a mannequin, or a dummy, or a real person.”

Thompson said that the actors were acrobatic and would wildly jump around behind bars before popping out at passers by.

“They had no sense of personal boundaries,” Thompson said.

James said that the actors go through a three-week audition process for their parts. They also attend courses that teach them the tactics and philosophy used at Cutting Edge Haunted House.

Thompson described it as the scariest haunted house she had ever visited, due to the intensity and length.

“It was so long, so it never let up. You were just constantly being jumped at,” Thompson said.

According to the Guinness World Records Web site, the house takes about 55 minutes to complete.

The Guinness Book of World Records dubbed The Cutting Edge Haunted House the longest walk-through horror house in the world.

Haunted House goers wind through over 2,261 feet of the warehouse from entrance to exit, according to the Web site.

James said that the attraction received a lot of national recognition this year as one of the top haunts in the country.

“In the horror industry, it’s kind of the Rolling Stone,” James said. “Anybody that makes any sort of horror flick on any level really wants to be reviewed in that magazine.”

The group who started the haunted house celebrated their 20th anniversary together this year. They have spent the past 19 years in Fort Worth.

James said most of the staff decided to start the project after graduating together from the University of Texas-Arlington.

He said they all loved Halloween and talked about opening a haunted house when they were younger. After graduation, the group decided to make their nightmares reality and opened their first attraction in Austin, Texas.

James said that most of the staff has been together since the opening.

“We’re a giant family and we get to play practical jokes on people. I just don’t see how it gets much better than that,” James said.