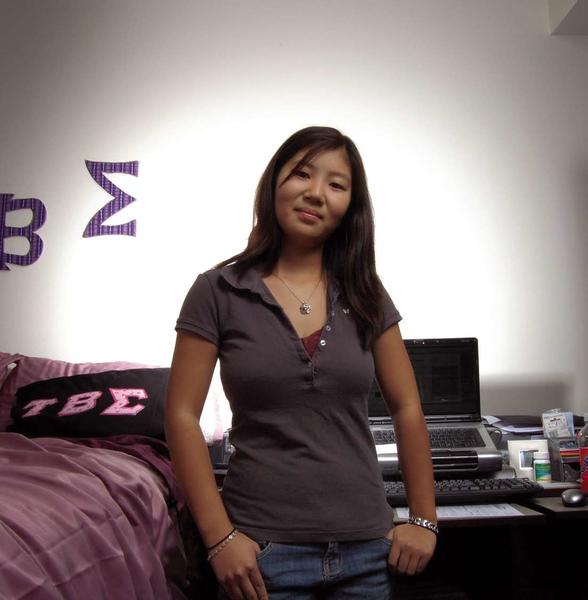 Kimmy Daycock fought cancer while
in diapers.
At two years old, Daycock, a sophomore
news-editorial journalism major,
was diagnosed with clear cell sarcoma,
a rare form of childhood cancer.
Emergency surgery removed the cancer
and her right kidney, and left the toddler
with a scar that stretched across
her torso from hip to hip. Ten days
of radiation and five years of chemotherapy
followed.
At five, Daycock’s cancer was in
remission. But that didn’t stop the
problems.
Her first surgery created scar tissue
that led to an obstruction when she was
seven, virtually cutting off her intestines.
They followed surgery resulted
in another scar, this one vertical.
After this obstruction, Daycock’s
bout with cancer and subsequent surgeries
were considered a successful
battle, long over 8212; until last December
when she spent Christmas Eve over
her toilet bowl.
“I woke up at midnight because I
didn’t feel well. I was pretty sure I
had eaten too much Christmas dinner,”
Daycock said. “But then, from
about 2:30 to 5:30, I just threw up the
whole time.”
After an early-morning trip to the
emergency room, she was given strong
medication and sent home. Daycock
finished Christmas with her family and
joined the Horned Frog Marching Band
in cheering on TCU at the Houston
Bowl. But her illness was only a harbinger
of what was to come.
The day after she returned home
to Round Rock, Texas, Daycock was
unable to finish her shift at work
because of her pain.
Having been through a similar situation
with Daycock 12 years before,
her parents knew what to do. A trip
back to the emergency room confirmed
their fears &- another obstruction in
Daycock’s intestines.
A three-hour surgery unblocked multiple
obstructions, removed damaged
intestines and moved organs out of the
void where her right kidney had once
been. Daycock was told she would be
home after three days of recovery.
She celebrated the New Year in the
hospital with her family, apple juice
and green Jello.
Soon after, Daycock suffered an
allergic reaction to a drug intended
to jump-start her digestive system, adding
several days to her stay.
By this time, Daycock hadn’t eaten
in ten days and weighed 86 pounds.
Diane Daycock spent her days and
nights at the hospital with her daughter
while her husband, Steve Daycock,
juggled his job and taking care of Kimmy’s
sister. In between sleeping and
watching nine seasons of America’s
Next Top Model with her mom, Daycock
also had plenty of visitors.
Daycock said the visitors made it
easier to endure the long days she
spent confined to bed.
“It was depressing in the hospital,”
she said. “It was so much disappointment.
I have no idea what I would’ve
done if my friends hadn’t been there.
It definitely kept my hopes up.”
By the following Sunday &- the day
before she was supposed to start school
&- her problems seemed to be subsiding,
and Daycock had worked her way
up to soft foods.
Daycock won’t be fully recovered
for several months, but she quickly
resumed her normal activities.
“The doctor told her that he wanted
her to take it easy and only do school,
but I wasn’t surprised when she called
and told me she had just been salsa
dancing,” Diane Daycock said. “She’s
just such a strong young lady, and she’s
she’s made it through it all.”