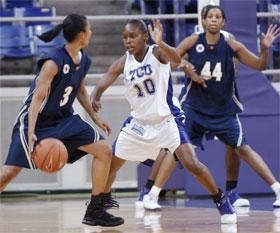 After two preseason victories, the women’s basketball team will open its regular season tonight against Long Beach State at Daniel-Meyer Coliseum. Monday, the Horned Frogs will host No. 10 Georgia.

Redshirt freshman forward Marissa Rivera said the team used its speed to beat then No. 3 Georgia 64-63 last year and plans to use the same strategy in the Monday contest.

She said another key to success against Georgia will be to keep a close eye on Bulldog forward Tasha Humphrey.

“Georgia is a really big team,” Rivera said. “They have Tasha Humphrey on the inside, but last year we were able to use our speed against them. We want to do that again this year.”

Junior forward Jenna Lohse said team’s speed will not only help the Lady Frogs compete against Georgia, but also will be an asset throughout the entire season.

“We’re a pretty speedy team,” Lohse said. “We run a lot, and all of us are pretty quick.”

“We don’t know their players very well and have to look at scouting reports,” Mittie said. “There is definitely an unknown with Long Beach.”

Rivera said the exhibition victories against Missouri Western and EV1, a team sponsored by Everyone’s Internet, helped the Horned Frogs find out where they stood with their on-court preparation.

“I think we really got to see where we were as far as the team,” Rivera said. “It really helped us figure out where we need to raise our game because they were really competitive games.”

TCU outscored Missouri Western in almost all offensive categories but, most notably, points in the paint with a 48-12 advantage.

“I think in the paint is where we have a lot of guards that can post up,” Lohse said. “We try to get them in the paint. We can play Vanessa (Clementino).”

Against EV1, the Lady Frogs coming off the bench bucketed 24 points.

“We’ve always had a strong bench,” Mittie said. “I think this year we’ve got a lot of inside players. It’s very important when someone comes off the bench that they give you a big lift.”

He also said successful teams have both strong defenses and potent offenses, and he said he hopes TCU will have both.

“For us to be a good offensive team, we have to create opportunities from our defense,” Mittie said. “I hope we’re a balanced team because I think you’ve got to have both to be a good team.”