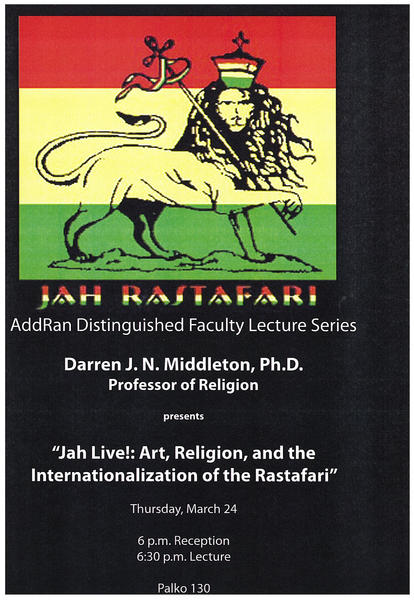 Rastafarianism usually sparks thoughts of ganja, reggae, Jamaica or Bob Marley, but Darren Middleton, a professor of religion at TCU, will discuss Rastafarianism in depth through the use of visual aids and music Thursday.

The lecture, titled “Jah Live!: Art, Religion, and the Internationalization of the Rastafari,” is the fourth lecture in the AddRan College of Liberal Arts’ Distinguished Faculty Lecture Series.

Middleton said this lecture is to inform students about the ideals and culture of this relatively new religious movement. This lecture is not about doctrines or beliefs, but about artistic expressions of the religion, he said.

Mark Dennis, assistant professor of East Asian Religions, said schools have tried to get students to expand their horizons through study abroad and now by religions and exposure to other cultures outside of what they’re used to.

“He’s really good at getting people to think about something that may seem unapproachable in a way that resonates and is as easily understandable,” Dennis said.

Students will be impacted by Middleton’s stories and relatable experiences, Dennis said. He added Middleton uses examples that students can relate to get them to think about their own life experiences.

Middleton has planned to play reggae music as well as give a PowerPoint presentation and other visual representations at the lecture to disclose the connection of art and religion.

“Art is the engine that drives Rastafarianism,” Middleton said.

Middleton said he hopes to give students a history of the Rastafarian movement in his 45-minute lecture and to share how this 80-year-old religion has spread around the world in such a short time. Rastafarianism spread from Jamaica to places like Ghana, West Africa, Japan, New Zealand and Australia, he said.

A new religion gets off the ground by popular culture and media through film, literature, music, painting, and art in general, Middleton said.

The basic culture of Rastafarianism is based on the belief that Haile Selassie, the last emperor of Ethiopia crowned in 1930, is the returned-again Christ, Middleton said. Middleton said the title of the lecture came from a Bob Marley song, “Jah Live,” which was written when Marley learned of Haile Selassie’s death.

Graham McMillan, a freshman political science major, said he did not know anything about Rastafarianism at all.

“I am looking forward to seeing what it’s all about,” he said.

McMillan said he has always thought of Rastafarianism as Bob Marley music, love, naturalism and vegetarianism. However, he is interested in learning what Rastafarians actually do, what they believe, where the religion came from and how prevalent Rastafarianism is in the world, he said.

Middleton said the event has gotten attention not only from the TCU community, but from local groups as well. In addition to TCU students, there will be church groups and students from Nolan Catholic High School in attendance who have decided to come to the event to learn more about Rastafarianism as well.

“Jah Live!: Art, Religion, and the Internationalization of the Rastafari”