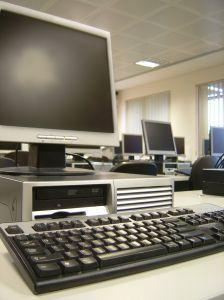 Despite a report that shows that shutting down computers after hours could save the university thousands of dollars, the university is considering, but not pursuing, a mandatory shutdown policy, a university official said.

Bryan Lucas, executive director of Technology Resources, wrote in an e-mail that there are about 3,500 student and classroom computers on campus. The university has not yet pursued the option of a mandatory shutdown policy, he said. Based on information from the report, doing so could save the university up to $98,000 a year.

A company that shuts down 1,000 computers after hours can expect to save $28,000 a year if the computers remain shut down for about 14 hours, according to a September 2008 report from 1E Energy Awareness Campaign. 1E is a global provider of Windows Systems Management software and services solutions, according to its Web site.

The report also stated that turning off all company computers in the U.S. every night would save more than $2.8 billion annually.

“I think it would be inaccurate to attempt to calculate savings in the same manner as that report did,” Lucas wrote. “There are variables such as PC power consumption rate and electricity costs that are different for our scenario.”

According to the report, the 108 million unused computers that U.S. companies maintain are expected to produce 20 million tons of carbon dioxide emissions in 2009, the equivalent of about 4 million cars.

1E also announced in the report that its program called NightWatchman automatically places computers in hibernation mode and saves open documents, reducing power usage. NightWatchman, which is available for all PC users, was first released in 1999.

Jon Hodgson, an associate with 1E, wrote in an e-mail that NightWatchman has been successfully employed at universities, not including TCU, and can shut down an entire network of computers down at a specified time.

“It is possible to set different power policies for different groups, buildings or even sites,” Hodgson said.

Sue Ott, administrative assistant in the school of music, said she shuts down her computer as a safety measure.

“Nobody can get on here and take my password,” Ott said.

Jonathan Brimmer, a senior accounting major, said he shuts down his desktop every night, but puts his laptop in hibernate mode.

“I suppose I shut down to reduce power and prolong the life of the computer,” Brimmer said.

The report also stated that 32 percent of U.S. employees do not know how to change the power settings on their computers. Altering power settings can allow a computer to reduce power after five minutes of inactivity during a workday, according to the report.