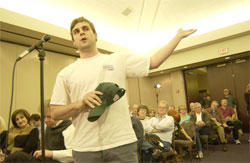 More than 100 student tenants, landlords, and homeowners met Wednesday night at the Kelly Alumni Center in an attempt to settle escalating tensions over traffic, noise and litter in TCU-area neighborhoods.The public hearing outlined several proposals to help ease residents’ woes. One proposal would allow for the rezoning of surrounding areas, which may lead to stricter regulations on the number of tenants allowed for a particular house.

An equal number spoke for and against the proposal to rezone. One resident said she believed the proposal might work now but could lead to future problems for the neighborhood.

Cole Lysaught, a senior finance major, acknowledged benefits to the proposal but said “it’s not suitable” because the cost of rent would increase with lower student occupancy. Lysaught and five of his fraternity brothers, who rent a house on S. University Drive, attended the hearing to voice their opinion on the matter.

Cole said she has rented to students for almost 15 years.

Several residents, including Henry and Vonna Tieding, complained about the noise from late-night parties. The Tiedings have lived in the same house on Shelby Avenue since 1976.

They said they don’t appreciate having to pick up trash and not getting a full night’s sleep but have had trouble finding ways to address problems in the neighborhood.

“It’s hard to call the cops because, you know, I love kids,” Vonna Tieding said.

Henry Tieding said one major problem is the “great big trucks” that clog either side of the street, reducing Shelby Avenue to one lane. He said he believes TCU should provide more on-campus housing to ease the problem.

Cole and several other landlords spoke highly of the students they rent homes to. They explained that when problems arise, neighbors should contact the landlords instead of the police.

Anthony Snipes, assistant to the city manager, said he thought the hearing was a good way to have both students and residents express options in the neighborhood. He said he hopes to have representatives from the Fort Worth Police Department for the Jan. 26 meeting at the Botanic Gardens.

The event was organized by the Unrelated Persons and Rental Registration Task Force, a group comprised of city and neighborhood association representatives and TCU employees.