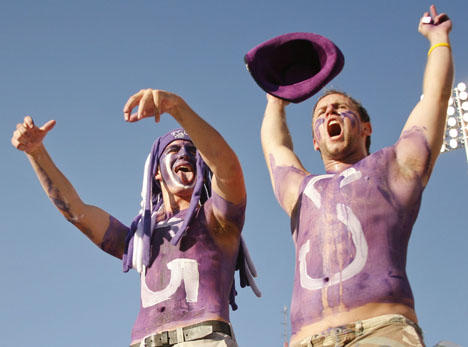 From free shuttles to reduced prices on food and drinks, hot spots around Cowboys Stadium offer both hospitality and discounts to fans on game days, including the Horned Frog football season opener this Saturday.

Arlington-area restaurants are preparing to make this weekend’s game day memorable and convenient for fans.

Humperdink’s Restaurant & Brewery is an American-style restaurant with a very versatile menu. Adam Hernandez, Humperdink’s manager, said the restaurant is known for its burgers, pizzas and salads, along with its beer, which is fresh-brewed on the premises.

According to Humperdink’s website, its award-winning Brewmasters create seasonal beers, many of which have been awarded medals at the Great American Beer Festival.

Humperdink’s often provides shuttles for events in the Arlington area and plans to provide students and fans with a shuttle to and from Cowboys Stadium on Saturday for $10, with no food purchase necessary.

“We want fans not to have to pay much money on parking on game days,” Hernandez said.

A guest services representative at Cowboys Stadium said parking at the venue costs anywhere from $15 to $30 on college game days.

Sherlock’s Baker St. Pub & Grill is a British-themed hot spot with events planned before, during and after competitions on game days. The restaurant features several selections on drinks and also has a late-night menu. Manager Chance Johnson said that in addition to the menu’s London grill specials, Sherlock’s is known for great bands that perform nightly at the venue.

According to Sherlock’s website, the restaurant has a happy hour daily from 2:00 p.m. to 9:00 p.m. and all day on Sundays. It is cigar-friendly and has darts, pool tables and outdoor seating.

Olenjack’s Grille is an option for fans who have not purchased tickets, but want to dine and enjoy the game. According to the Olenjack’s website, the restaurant is the perfect place to watch the big game.

Olenjack’s Manager Adam Jones said the venue is known for its shrimp and grits. Where parking is concerned, Jones said most Lincoln Square restaurants require customers to purchase at least $40 in fare from their restaurants and then place the receipt on their dashboards.

Though Olenjack’s offers a shuttle service for free, Jones said he hopes customers who plan to use the shuttle stop in, buy a drink and see what the restaurant has to offer.

Many other restaurants and bars in the Arlington area plan to have specials on Saturday to celebrate the Horned Frog season opener. Students would need their ID on-hand in order to be eligible for these offers.

Discounts on beer and drinks

10 percent off on any purchase