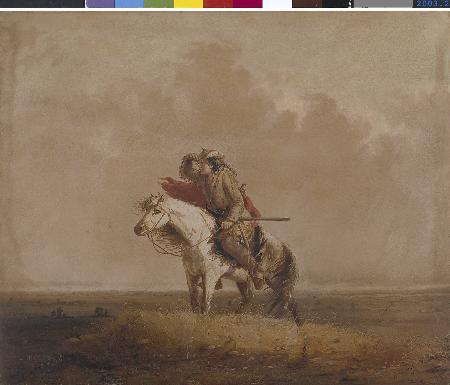 After a century of misplaced artwork, the watercolors and sketches of Alfred Jacob Miller (1810-1874) were discovered in a storage room of the Peale Museum in Baltimore and are now on display at the Amon Carter Museum in an exhibit titled “Sentimental Journey.”

Filled with buffaloes and Native Americans, Miller’s paintings gain more of an intriguing quality when some of the work’s history is understood.

Miller studied under Thomas Sully and in 1837, joined an expedition to the American West and is considered the first artist to depict life in the Rocky Mountains.

On the expedition, Miller created his most important artworks that illustrate the Native American and frontier life.

The most beautiful painting in the exhibit is an oil painting on canvas titled “Bartering for a Bride (The Trapper’s Bride)” and is a great example of his authentic work, which was completed in 1845. During the time the painting took place, fur trappers were in their last days of business, and Miller captures the very last essence of that beautiful, distinctive life.

The oil painting shows a man, who looks to be smitten, taking the hand of a young Native American girl dressed in an off-white leather dress. The fur trapper seems to be the only white person in the painting as the Native American girl’s family and friends are staring intensely at the white man, but his eyes remain only on the young girl.

While in competition with other artists in the Baltimore merchant class in the late 19th century, Miller made his work more detailed and valuable because of its documenting aspect.

“Sentimental Journey” creates a new understanding of the life that once existed during the frontier times because of its attractiveness and authentic interpretations of the long-ago culture of the Rocky Mountains.

The days of fur trappers and traders of the American West are long gone, but Miller’s work has kept that period alive through his oil paintings, which are so smooth one would want to reach out and touch them.

Miller captures the uncertainty of a new land on the oil on canvas painting finished in 1860 titled “The Lost Greenhorn (Lost on the Prairie.)”

The painting shows what appears to be a white man who sits uneasily upon his horse, which is as white as snow, looking out onto an empty prairie searching for his way. This newcomer is unfamiliar with this territory that he has ridden upon and places his hand on top of his hat, suggesting he is looking further down the prairie to discover some familiar path.

Perhaps Miller best understood this lost greenhorn, considering he was a Baltimore resident in an area and culture not well understood by white, upper-class merchants of his time. Miller tried to captivate this world of the American West as clear and beautiful as much as possible to his peers and buyers at home.

“Sentimental Journey” is definitely a visual voyage that takes one back in time to an attention-grabbing era and is on exhibit until Jan. 11, 2009.