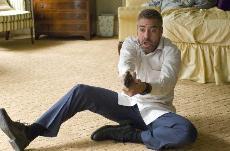 When they’re not filming grim dramas like “No Country for Old Men,” the Coen brothers usually fall back on screwball comedies like “O Brother, Where Art Thou?”

“Burn After Reading” seems to find a balance between the two, reminding me most of the Coens’ “Fargo” and their shaggy dog story, “The Big Lebowski.”

The latter film had a quest that seemingly led nowhere. Here the quest leads nowhere but leaves a trail of bodies.

But that doesn’t keep audiences from having a good time along the way. The movie is laugh-out-loud funny in several parts, mostly with Brad Pitt’s character.

Most of the laughs come from a place of anxiety, as if the audience didn’t know whether to laugh or cringe.

The opening act is a little slow, but once you get used to the offbeat rhythm of the movie, the events start to snowball from a dark comedy to a bleak farce by the last scene.

When the lights come on, you might be scratching your head at what just happened. I had the same response after watching “Lebowski,” and if that film’s rabid cult following is any indication, “Burn After Reading” will have a better second life on DVD.