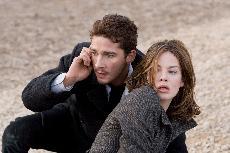 As a senior in high school, I wrote my research paper on George Orwell’s 1984, which explores the idea of “Big Brother” and the principle that someone is always watching. If “Eagle Eye” had come out a couple of years earlier, I would have written the paper on it instead of the book.

For 45-minutes of this film, I was fooled into thinking the movie was being directed by Orwell. However, executive producer Steven Spielberg and director D.J. Caruso have constructed a largely seamless movie addressing several emotionally-charged topics while being somewhat intellectually stimulating, overwhelmingly farfetched and exceedingly liberal.

Shia LaBeouf stars as Jerry Shaw, your everyday “average Joe” who walks to his apartment one evening to find a prodigious amount of illegal weapons and explosives. After receiving a mysterious phone call from a woman telling him that he has been “activated,” he sets off on a Bourne Ultimatum-like chase across the country with complete stranger Rachel Holloman, played by Michelle Monaghan, in order to accomplish the movie’s political agenda.

Without disclosing any major plot elements, suffice it to say that there existed several underlying themes anchored in policies implemented by our current president and his administration, the Patriot Act being one of them. This whole film addresses the idea of unchecked government running rampant and becoming “destructive of these ends” as described in the Declaration of Independence.

Left-wing propaganda aside, I thoroughly enjoyed this movie, and being a huge LaBeouf fan doesn’t hurt either. The film was about 50 percent predictable and 87.4 percent farfetched and fabricated, just like that percentage. However, if intense action is a forte of yours, as it is mine, then this movie will leave you grasping for air upon its climax. Vigorous chase scenes are stacked upon CGI effects added to violent car crashes and enormous explosions to make the admission ticket well worth the money.

Many people undoubtedly will think the plot was predictable and the movie an astounding disappointment. I disagree. This film was supposed to be over the top and painfully implausible, just as it was meant to be entertaining with an implicit agenda. The plot was meticulously intricate, which kept me guessing for a long time and grasped my attention until the exhilarating climactic crescendo.

“Eagle Eye” is definitely not a “Dark Knight” caliber summer blockbuster. However, despite being hopelessly paranoid at times, it combines a well-thought story line with intense action and suspense to be a decent movie, which I enjoyed watching. In essence, you will either enjoy “Eagle Eye” or you will not, and as a famous person once said, “there is no middle ground.”