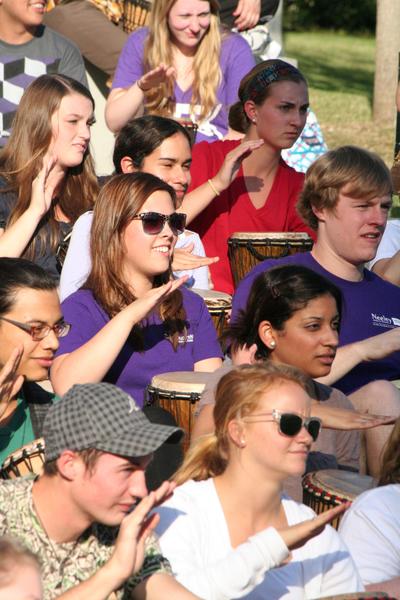 The thirteenth year of Connections ended with a celebration of interactive drumming and tribal dancing last Thursday evening. The grand finale was just one of the ways the program was almost unrecognizable to upperclassmen who had participated in previous years.

Connections turned into a distinct first-year program with a leadership emphasis this year, faculty directors said.

According to the Student Development Services website, Connections is a six-week leadership program incorporated in the First Year Experience and is a system the university uses to transition students into college.

Changes to this year’s Connections program included voluntary sign ups, a shortened meeting length, new curriculum and a large group meeting at the beginning of every session.

Daniel Terry, assistant director of leadership and Community Renewal in Student Development Services, said feedback from participants led to changes in the program.

“We felt like we needed to shorten the program and change the content,” Terry said. “We went with the “let’s get the most bang for your buck’ approach.”

Faculty directors said they would not have specific numbers on attendance changes until after the program finished, but that the change in attendance was positive.

Natasha Chapman, director of the TCU Leadership Center, said the nonmandatory policy changed the culture of Connections and why people went.

“The voluntary policy has been better for the small group dynamic,” he said.

“I come back because I like to have fun and meet other people,” Foster said.

Jessica Hendricks, a senior psychology and criminal justice double major and Connections director, said the new curriculum focused on students’ effect on the community rather than just how to have a successful freshman year.

Terry said the new curriculum focused mainly on the connections between oneself, the community and the world.

“That kind of awareness is the kind of thing we’re trying to foster at TCU,” he said. “I see it [the new curriculum] as a way to flesh out the values of the mission statement.”

David Shaver, a freshman pre-business major and “Brochacho” small group member, said the program gave him direction of who he is and where he needs to go.

“The awesome leadership development and great people keep me coming back,” Shaver said.

Terry said his was his favorite change to Connections was having a large group meeting at the beginning of each session. He said he thought that change would be the most popular one.

The meetings created a sense of energy and community by having everyone in the same room at the same time, he said.

During the meetings, a keynote speaker addressed the theme for the day, Terry said.

She said students then went into their small groups where mentors gave them the week’s message.

Shaver said listening to speakers before small group meetings was his favorite part of each session.