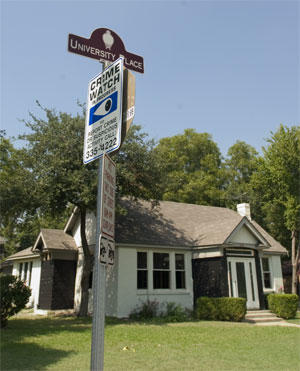 Residents in the University Place neighborhood talk and visit on the sidewalks in front of their homes. During the warmer months, they organize block parties and barbecues. Parents sit on their front porches in the evenings and watch their children play outside. And since the 1920s and 30s, when most of the homes were built, it’s been this way.”No one has done anything yet,” Susan Smith, a University Place resident, said.

The “yet” is key for University Place residents who are trying to get their six-block, 157-house neighborhood rezoned from two-family housing, to one-family housing. The neighborhood, which is located adjacent to the Moudy Building, is separated from campus by Cantey Street.

A number of University Place residents began working in 2000 to get University Place rezoned to protect their neighborhood from increased duplex development. Getting approval for the one-family housing from the Fort Worth Zoning Commission is the first step toward preserving University Place, Susan Smith said.

“Through the city, we’re offered an avenue to change it from duplex to single family,” Susan Smith said. “The neighborhood is so small we feel in a sense it’s fragile and wouldn’t take much.”

University Place, which was originally zoned as single-family housing, was rezoned as duplex housing during World War II, because of a housing shortage for soldiers. After the war, it was never changed back.

During the public hearing for the zoning change on Sept. 14, Brian Livingston, University Place Homeowners’ Association past president, said members of the association foresee real estate investors tearing down and splitting up homes in the neighborhood for duplex housing.

And although Susan Smith and her husband Jim say they haven’t seen any signs of change yet, they want the zoning change to work as a long-term, permanent solution.

“There’s a turnover when people outgrow homes,” Jim Smith said. “We want it to be for the better, and not work as a downward spiral.” And as of now, Jim Smith said, University Place has a perfect mix of residents: students, young families and older, retired residents.

“The mix right now on any one thing is not overwhelming,” he said.

Fort Worth Neighborhood Police Officer Charles Gonzalez has been assigned to the Frisco Heights neighborhood since early September and said he writes more than 50 parking tickets a day. Gonzalez was assigned to the Frisco Heights Neighborhood in 2003 and has visited with students in 20 rental houses because of noise violations. “There’s kids coming out of houses to their cars, screaming and hollering, urinating in yards, throwing trash and breaking windows,” Gonzalez said.

This is exactly what homeowners’ association members and a majority of University Park residents want to prevent.

Still, some residents who rent to TCU students don’t see a problem. Valerie Cole, who rents out a house on University Drive to TCU students, said she has not yet heard of any problems with TCU tenants in the University Place neighborhood.

“I don’t know why they’re trying to change it so aggressively,” Cole said.

Fred Wachter, who has lived in University Place for 30 years, said the zoning change is the most divisive issue he has ever seen in the neighborhood.

“They say they want to preserve the flavor of the neighborhood, but they’re trying to change the flavor that it’s always been,” Wachter said.

However, residents in favor of the change are trying to rezone the area not just to keep it protected from increased duplex development but also from TCU campus expansion.

Jim Smith said he would feel more comfortable if TCU would define its development boundaries. According to the zoning case staff report, University Place is only 40 feet from TCU, the nearest mixed-use growth center.

“What their long range plans and goals are, I don’t know. I do know what’s happened on the other side of campus where TCU has put a toe in,” Jim Smith said.

In addition to more than 100 TCU-owned properties around the campus, the Tarrant Appraisal District Web site lists more than 15 TCU-owned duplex and multifamily residences in close proximity to the University Place neighborhood.

However, Don Mills, vice chancellor for student affairs, said TCU is not interested in developing the land that is in the University Place neighborhood.

Logical places are where commercial development already exists – Berry Street and McCart Avenue, Mills said. He said the Brite Divinity housing, located on Sandage Street, is an example of such development.

“TCU bought an apartment complex and tore it down and rebuilt. It wasn’t going in and buying homes,” Mills said.

He said TCU would respect the single family zoning if University Place were to achieve its zoning change request. However, he also said TCU understands that students need places to live close to campus.

As of fall 2004, 46 percent of undergraduate students chose to live on campus, according to the TCU Fact Book.

“It is incumbent upon TCU to provide housing and not depend on the neighborhoods to provide it,” Mills said. He said the Grand Marc development on Berry Street, which will be finished a year from now, will provide housing for over 600 students who choose to live off campus.

The University Place neighborhood does have a set of concerns that other Dallas/Fort Worth neighborhoods near universities do not share, area zoning commissioners said.

Robert Shepard, Arlington Planning and Zoning Commission chairman, said that unlike TCU, the University of Texas at Arlington has been a commuter college for years.

“I don’t think that the area around UTA has had the opportunity to experience a residence college where thousands of students live near or around the campus,” Shepard said.

In the past, most UTA students lived on campus, commuted from home or lived in apartment complexes, Shepard said. Just recently did the demand for student rental housing around campus increase.

“The market seems to be responding by trying to supply housing to students who live off campus,” Shepard said. “Most of the cases we’ve been seeing around UTA are to increase the density of residents.”

However, Shepard said that not enough time has passed in the UTA area for problems between students and residents to manifest.

At SMU, Dallas City Planning Commissioner Bill “Bulldog” Cunningham confirmed that duplex and student rental housing is located directly adjacent to campus and is separated from single-family residents, who are clustered farther away in areas such as Highland Park. This separation of permanent residents and students prevents the two groups from clashing, he said.

“I don’t think it’s a plot against students,” Greenhill said. “There may be some two-family homes deep within the neighborhood, and they want to keep the neighborhood from becoming more dense.”

Carly Allen, a junior studio art major who lives in University Place, said although she does have a good relationship with her neighbors, she thinks the zoning change request is discriminatory.

“It’s affecting the people who live here,” Allen said. “I don’t think it makes much sense to live right next to a college and not expect to live next to students.”

Jim Smith said he feels the best way to prevent problems in the neighborhood is for them not to get started. But residents in favor of the change need their neighborhood to be rezoned before that is possible.

And for now, University Place residents have a little longer to wait to find out if the zoning change will pass.

At the Sept. 14 hearing,city zoning commissioners did not recommend the zoning change go through to the City Council. Instead, they gave residents 60 days of continued discussion.

Livingston said residents in support of the change do not know why the commission did not recommend the zoning change to the City Council. A petition with 75 percent of the University Place residents was given to the Zoning Commission prior to the hearings.

Jill Wachter, a resident with a garage apartment who has lived in University Place on and off since 1939 and is opposed to the zoning change, said after the hearing, that each resident feels that his or her concerns are valid.

“Your home is your most precious possession,” Wachter said. “It’s a very emotional issue.