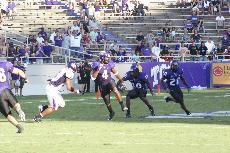 The No. 24 Horned Frogs will take the nation’s top-ranked defense north to Norman, Okla., to face the No. 2 Oklahoma Sooners and the nation’s best scoring offense Saturday night.

The Frogs have held opponents to a stifling 183 yards per game and 7.8 points per game. Their 13 turnovers forced are good enough for third in the nation.

“Their execution and discipline is what makes them so good,” Oklahoma head coach Bob Stoops said of TCU in his weekly press conference. “They are very sound.”

The defense, excluding a blocked punt returned for a touchdown against Stanford, has allowed 24 points on the season. No team has scored twice in a game against the Frogs’ defense.

“It is one of the better defenses,” said 6-foot 8-inch Oklahoma offensive lineman Phil Loadholt at the team’s press conference. “It’s not pressure as much as it is an opportunity to go against a great defense. They’re real quick and have a lot of good linebackers. They have a really good and solid core with a lot of seniors.”

Enter the Oklahoma Sooners’ offense, which is racking up 54.67 points per game and 556.67 yards per game.

“You don’t stop Oklahoma because of the talent level they have at wide receiver and running back, and they’re huge up front,” head coach Gary Patterson said. “What you have to do is contain them. You can’t let them run the football. You have to tackle, play great leverage and not let them throw the ball over your head.”

Holding the reigns for Oklahoma is sophomore quarterback Sam Bradford. In his second year at the helm, Bradford is completing 79 percent of his passes en route to 882 yards and 12 touchdowns.

Running back DeMarco Murray has led the ground game for the Sooners with 312 yards and three touchdowns.

TCU running back Aaron Brown returned to the lineup against SMU and contributed with 157 all-purpose yards. Patterson said he was happy to see the versatile senior back on the field.

“Aaron helped us in a couple of facets, whether it was running the football, kickoffs or with third down catches and conversions,” Patterson said. “He gives us someone with speed who can make guys miss. When you watch him run around, it’s easy to see why you’re glad he’s back.”

The Frogs will look to duplicate their 2005 performance in Norman, when they knocked off the Sooners 17-10. Since then, Oklahoma has ripped off 20 straight wins at home.

“The only thing we have control over is TCU,” Patterson said. “That’s how we won the game in 2005. We didn’t know what kind of football team we had. We just went out and played with heart. We got a couple of turnovers and breaks and had a chance to win the game. That’s all you can worry about.”